Arsenal moved up to third in the Premier League table and boosted their chances of a return to the Champions League as they beat Newcastle 2-0 on Monday night.

Aaron Ramsey, who will leave for Juventus in the summer when his contract expires, tucked away the opener before Alexandre Lacazette made sure of the points with a lofted finish in the closing stages.

The victory takes Unai Emery's side above both Tottenham and Manchester United in the top-four race and extended their run of home league wins to 10.

In moving on to 63 points, the Gunners have equalled their tally from the whole of last season - Arsene Wenger's final campaign at the helm - and given themselves a good opportunity to end a two-year hiatus from Europe's elite club competition. 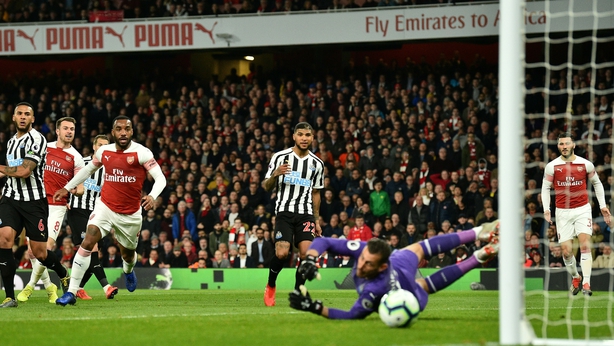 Only reigning champions Manchester City can boast a better record in front of their own fans this season - but Arsenal have only two home games remaining and need to add to their five wins on the road if they are to maintain their top-four position.

Newcastle defended well but rarely got in behind an Arsenal defence which did not include captain Laurent Koscielny, who missed out due to a foot injury.

Ramsey finished well at the back-post but saw his effort chalked off as referee Anthony Taylor noticed Sokratis Papastathopoulos tugging back Florian Lejeune in the build-up.

The Wales international did not have too long to wait to toast his fifth goal of the season as Lacazette broke into the box and the ball deflected off DeAndre Yedlin - with Ramsey slotting home off the post.

Newcastle responded well and Salomon Rondon bullied Sokratis out of possession to break in on goal, only to slip as the vital time and his shot was pushed behind by Bernd Leno. 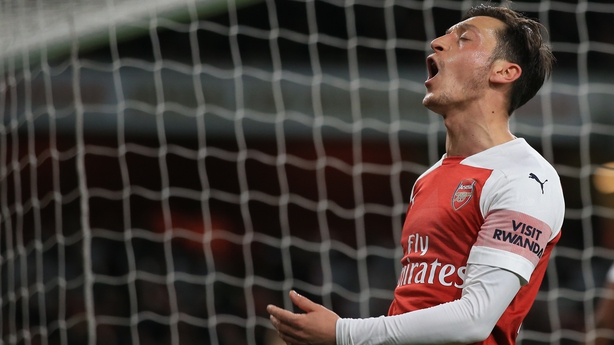 While Arsenal struggled to make the final pass, they came close to doubling their advantage on the stroke of half-time only for Matt Ritchie to brilliantly head Lacazette's goalbound effort off the line.

The hosts continued to be frustrated after the interval and Emery introduced Pierre-Emerick Aubameyang off the bench to inject more goalscoring threat to his forward line.

Ramsey limped off soon after, heading straight down the tunnel to be replaced by Mohamed Elneny, with Aubameyang stinging the palms of Martin Dubravka with his first sight of goal.

Lacazette sewed up the win as he latched on to Aubameyang's flicked header before lofting the ball over the onrushing Dubravka, before the French striker had a header ruled out for fouling the Newcastle goalkeeper.

The second goal killed off any lingering doubts of a surprise late comeback from the visitors, who remain 14th - seven points above the relegation zone.