Mohamed Salah may be on the longest goalscoring drought of his Liverpool career but he played a huge part in keeping their title hopes alive in a last-gasp 2-1 win over Tottenham.

It appeared Jurgen Klopp's side were about to hand the initiative to Manchester City after Lucas Moura cancelled out Roberto Firmino's first-half header, leaving the Reds level on 77 points but significantly behind on goal difference.

However, Salah - now eight matches without finding the net - popped up at the far post to head goalwards; Hugo Lloris could only palm out weakly and Toby Alderweireld got himself in an horrendous mess to divert it back past his goalkeeper in the 90th minute.

It was a narrow escape for Klopp's side, who return to the top of the table with a two-point lead having played one match more, having faded badly after starting so well.

Salah has had his critics for not scoring since February 9 but he has played a huge part in ensuring Liverpool keep pace with City.

Tottenham, potential title contenders until February, should have put a huge dent in Liverpool's hopes of ending a 29-year wait for the title but, like their league season, they came up short and have not won a Premier League match now since mid-February.

Mauricio Pochettino, in the stands serving a touchline ban, brought in Alderweireld as a third central defender but it did not give then the advantage they wanted down the flanks through wing-backs Kieran Trippier and Danny Rose, who more often than not just made the backline a flat five. 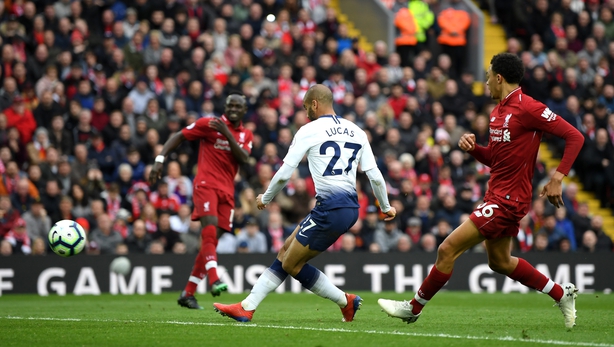 And even with that extra man guarding the penalty area they were still powerless to stop Liverpool's 16th-minute goal.

Robertson, a defender having the most productive season since fellow left-backs Andy Hinchliffe (in 1994-95) and Leighton Baines (2010-11) provided 11 assists in a campaign, was given too much time to pick his spot.

Nevertheless, the Scotland captain's delivery was absolutely pinpoint, curling a cross in between Davinson Sanchez and Jan Vertonghen which Firmino headed down and past Hugo Lloris.

It was Firmino's 14th goal of the season, while Robertson became the first Liverpool defender to provide at least nine assists in a single Premier League season and only Chelsea's Eden Hazard and Bournemouth's Ryan Fraser, both wingers, currently have more.

Another Robertson cross half-cleared to Trent Alexander-Arnold was returned on the half-volley but dropped just wide.

Despite their apparent difficulty in getting organised in defence Spurs were still able to string together coherent attacks and it required a stroke of luck for goalkeeper Alisson Becker, out of his area when the ball hit his shoulder, to be able to collect Danny Rose's long pass at the second attempt, with Dele Alli lurking.

Robertson also cleverly stood his ground to block Lucas, Tottenham's busiest player in the first half, as he tried to get on the end of a Rose cross while Alli fired over after exchanging passes with Christian Eriksen.

Mane curled a shot narrowly wide after cutting back onto his right foot as Spurs continued to struggle dealing with Liverpool's left side, while just after the break Virgil Van Dijk headed over from a cleverly worked corner.

It was difficult to keep the hosts' all-action left-back out of the game, however, and he denied Eriksen with a diving block after Alisson had parried Harry Kane's first shot of the game. 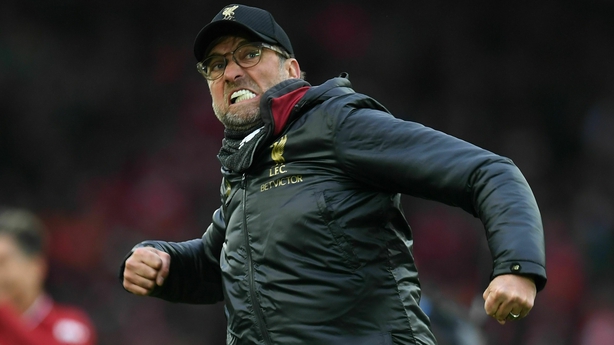 But the equaliser was to come from Lucas, courtesy of brilliant control from Trippier from Kane's raking crossfield pass and Eriksen helping on the ball to the Brazilian to score his side's first goal not registered by Kane since February 13.

With 15 minutes to go, and Spurs in the ascendancy, Klopp turned to Fabinho and Divock Origi, who almost immediately had a free-kick deflected wide.

Moussa Sissoko had chance to win it for the visitors five minutes from time when Liverpool were caught two-on-one at the back but the one was Van Dijk who, wary of the greater danger of Son Heung-min, delayed long enough to force the Frenchman into a decision and he blazed over.

It was to prove costly thanks to the late intervention of Salah and Alderweireld, who was credited with the 400th goal of Klopp's Anfield reign in his 197th game.