The last few years have been a two-way race for the title between the Lilywhites and Cork City but, despite beating their arch-rivals 1-0 last night, Dundalk still trail leaders Shamrock Rovers and are just a point ahead of Bohemians.

"We just worry about ourselves but it is good for the league," Gill, who is assisting manager Vinnie Perth, told RTÉ Sport.

"You want a strong league and you want strong teams in it.

"All we can do is focus on ourselves. We’re unbeaten now in a few games, we’ve kept four clean sheets and we’re getting bodies back from injuries so we’re in a good place." 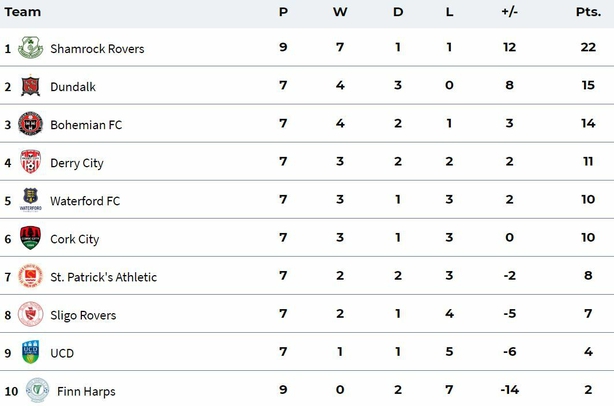 Gill was delighted with his side's display against the Rebels as they continue to await the return of injury victims Chris Shields (back in 10 days), Patrick McEleney (2-3 weeks) and Robbie Benson (June).

"Two teams going at it hammer and tongs," said Gill. "Our players deserve great credit, I thought we were excellent on the night.

"We scored at the right time because we were controlling the game at that period.

"Second half we probably dropped off a little bit but we dealt with everything they threw at us.

"We had to deal with a lot of aerial stuff, which we did, and I thought we were full value for the three points.

"If we had dropped points we would have been devastated because the players put in a huge effort and they’ve been magnificent since we’ve had this bad run of injuries.

"When we get those players back, if we can stay in touch, we’re very happy where we’re at."

Cork boss John Caulfield accepted that the better team had won and suggested a European spot rather than the title is a more realistic aim for a team that is rebuilding.

"We’re disappointed. We didn’t play as well as we had hoped and planned all week," he said.

"Over the 90 minutes, Dundalk were the better team, there’s no doubt about that.

"Dan Casey got injured yesterday, we changed our back four. Then Colm Horgan going off upset our balance a bit but at the same time we didn’t create enough chances at the end of the day. We need to pass the ball better.

"We didn’t block the cross and gave a soft goal away. Up here it’s always difficult, if you’re chasing a game it suits Dundalk.

"We have a lot of new players and young players, and a number of guys are injured at the moment.

"We’re working hard and we’re hoping we can stay in there. If we can compete for Europe, that’s what we’re trying to do."

Perhaps unsurprisingly, there were differing views on a late decision not to award Cork a penalty for handball.

"We could have had a penalty at the end, it was a handball," said Caulfield. "In modern football, those decisions seem to be given but at the same time over the 90 minutes we didn’t create a lot of chances."

"There was a shout for a penalty at the end, I don’t think it was," was Gill's verdict.