Ireland’s winning start to the Euro 2020 qualifying campaign continued as Mick McCarthy’s side beat Georgia 1-0 at the Aviva Stadium.

Conor Hourihane’s 36th-minute free-kick proved the difference as a commanding and dominant Irish performance earned a deserved victory in front of 40,000 at the Dublin arena.

The victory ensured McCarthy’s side would open their campaign with two wins from two ahead of their next fixture away in Copenhagen in June.

With so much talk about off-field matters and potential protests in the build-up to the game, normal service resumed once inside the stadium as the arena was less than half-full as the teams came out for the anthems.

The Irish fans are renowned for their excellent support of their side, but are oft quite tardy to turn up on time. The old South Terrace was filling up nicely, however, and there was a great roar to round off the pre-match anthems.

McCarthy would need the fans to play their part, likewise, the team would need to start on the front foot.

No place for Matt Doherty in the starting XI for Ireland as McCarthy opted for a flat back four, unwilling to attempt to accommodate the Wolves man in the same team as captain Seamus Coleman.

A slow start to the game, however, the visitors displayed their attacking intentions early on as Nika Kvekveskiri and Vato Arveladze played the ball through the Irish midfield, encouraged by a high defensive line – David McGoldrick’s pace in behind not an immediate concern, it would appear.

McGoldrick did cause an early issue, bursting down the line to win a corner, but just like an earlier ball launched into the Georgia box, the visitors dealt with the aerial Irish attack.

Jeff Hendrick’s crunching tackle in the 11th minute set the tone for Ireland’s first-half performance as Conor Hourihane strode onto the loose ball, racing through, before forcing a fine save from Giorgi Lorla.

The Aston Villa man picked his spot and sent it across the keeper but the better option was to square to the unmarked Brady.

Hendrick’s influence continued as Ireland ran continuously at the retreating defence and just a minute later, the rebound pass to Brady teed the ball up for McGoldrick, whose fine half-volley flew into the side-netting from 22 yards.

Ireland were now in complete control, and the attacking intent promised was delivered with Coleman right up with play on his flank, while Hourihane appeared to have the freedom of the pitch arriving from deep.

A Robbie Brady free was poorly executed and went straight into the wall but Ireland attacked again, this time McClean first to a loose ball coming in off the left flank.

Another free, another Brady effort, this time rolled square to the edge of the box. Well struck by the Burnley man but the ball flew high over the bar.

But what a flying start from Ireland, who were camped in the visitors’ half for most of the first 15 minutes.

Ireland enjoyed another great chance in the 22nd minute as Coleman, again bursting up the right flank, smashed a fine ball across the face but Brady, arriving at the near post, was just lacking in height, if not endeavour.

Georgia finally played their way up the pitch in the 25th minute with some neat passing and moving and were rewarded with a corner.

A tempting ball into the box, which Giorgi Kvilitaia won, managing to guide his effort on target. Glenn Whelan was on the post and helped the ball away, as Randolph left it for the midfielder to deal with the effort.

Ireland again took control and played some neat football down the right with Coleman, Brady and Hendrick all in-sync.

And in the 32nd minute, there was more joy for McCarthy’s side – this time through the middle – and again it was Hendrick the play-maker, rolling it into a turning McGoldrick who took the ball in his stride but was taken down in the process.

The free-kick would have to wait as the tennis balls were finally launched, mainly from behind the Ireland goal – the match held up for maybe two or three minutes as a hundred or so balls were removed. Randolph with largely nothing to do helping with the clean-up operation.

But it was worth the wait.

Up stepped Hourihane and drilled a fantastic effort from 25 yards around the wall and beyond the outstretched Loria as Ireland took a deserved lead.

Shane Duffy may not get an official assist, but the big man’s presence at the end of the wall certainly opened up that side of the goal where the ball ended up.

Georgia, in truth had nothing to offer in return and had to wait until the third minute of tennis-ball influenced added time before they carved out a really dangerous opening.

For the first time, Ireland were dragged out of position as the visitors worked the ball down both flanks before a fine diagonal was launched from the right.

Coleman lost the lively Otar Kiteishvilli who arrived in off the left flank to guide a fine header into the path of Valeriane Gvilia.

But as in Gibraltar on Saturday night, it was Randolph to the rescue once again as the midfielder’s ferociously struck effort from point-blank range was parried and eventually cleared.

Superb save from Darren Randolph and quick reaction from James McClean keeps the score at 1-0 #irlgeo #irevgeo #rtesoccer https://t.co/2afD0dnj1z pic.twitter.com/1Q6cQJkSeE

A slow start to the second half as both sides had chances to create with set-pieces within range but nothing came from either effort.

Ireland had the ball in the back of the net in the 58th minute but it would be chalked off.

A lovely move involving McGoldrick, Brady and Stevens, who then sent a square ball across the face, ending with Hendrick side-footing home from five yards, however, the midfielder had just strayed offside.

Two minutes later, Ireland absorbed some pressure from a Georgia side who were starting to show a bit more creativity, before sending the ball clear to the feet of the trusty McGoldrick.

The Sheffield United man again turned his man and raced clear into the visitors’ half. An audacious effort followed with the keeper off his line but the execution failed to match the imagination as the ball sailed high over the bar from 40 yards out.

A penalty appeal was waved away in the 65th minute – it would have been soft – before Ireland attacked again, this time Stevens up in attack. The former Shamrock Rovers man started and finished a move but his right-footed effort was dragged wide of the near post.

McGoldrick had a chance to seal the points for Ireland in the 72nd minute as he raced clear after a long hopeful ball from the back was mis-read by the last man.

The Ireland forward clipped the ball past the advancing keeper but the touch has a bit too much on it and the angle proved too acute as he tried to turn the ball home.

But Ireland, to their credit, were not happy to sit on the slender lead and kept the intensity up as the game moved into the final ten minutes – Aiden O’Brien and Matt Doherty now on for Brady and McGoldrick, who left the pitch to a well-deserved standing ovation. The Sheffield United man was later named man of the match

Georgia gambled for the final five minutes by sacrificing a defender for an attacker, but it was Ireland who kept on the offensive to see out the game and add another three points to the three gained in Gibraltar to top the group as Switzerland and Denmark drew 3-3 in the other Group D match taking place. 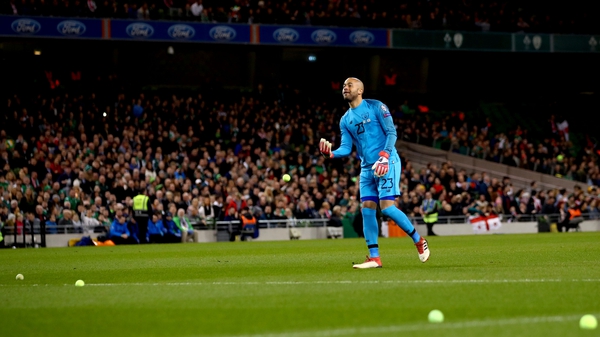