England's impressive start to Euro 2020 qualification continued with a first ever win in Montenegro, but the 5-1 victory was overshadowed by racist chanting.

Just 72 hours after kicking off their European Championship journey by hitting five without reply against the Czech Republic, the Three Lions continued their Group A campaign in Podgorica at what has previously been an unhappy hunting ground.

Marko Vesovic's early strike had the hosts dreaming, but Ross Barkley's brace along with Michael Keane, Harry Kane and Raheem Sterling efforts sealed the three points at the Gradski Stadion.

The latter made a gesture with his ears towards the Montenegro fans after scoring and there were monkey chants aimed at Danny Rose towards the end.

It was a despicable end to a night that saw the Three Lions win back-to-back games by five goals or more for the first time since 1984 as Southgate's decision to turn to young talent paid off. 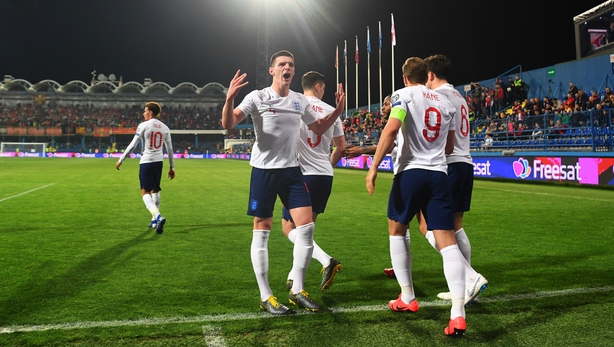 Declan Rice looked comfortable enough on his first start and Callum Hudson-Odoi recovered from a nervy opening in impressive fashion on the night he became the second-youngest player to start a competitive match for his country.

The 18-year-old and then Keane were culpable of failing to clear the ball as Vesovic opened the scoring, but both recovered impressively.

The latter rose to head home his first England goal from a free-kick sent in by Barkley, who turned home after a shot from Hudson-Odoi.

Barkley slammed home a second and Kane turned in a cross on the break from Sterling, who gestured with his ears towards the home fans after latching onto an exquisite Jordan Henderson through ball.

Hudson-Odoi picked up an object thrown onto the field during the aftermath of that goal, while things boiled over late on and Rose was subjected to monkey chants.