Vladimir Weiss admits he will know what Georgia's Euro 2020 fate is likely to be by the time the final whistle blows in Tuesday night's qualifier against the Republic of Ireland.

The Georgians lost their opening Group D fixture 2-0 to Switzerland on Saturday and a repeat at the Aviva Stadium would leave them off the pace in the race for qualification.

Weiss' men have already secured a play-off place as a result of their fine Nations League campaign, but as they continue their quest for a first trip to the final of a major tournament, the Slovakian believes what happens in Dublin could prove key.

He said: "We have a chance next year to do something amazing for Georgia football, but we must play now at this moment. Two teams go through and we will try to do it also in the group, which would be something unbelievable.

"But it's not easy. The favourite in the group is of course Switzerland, then Ireland and Denmark and we and Gibraltar, we will try to do it.

"Sometimes in life, miracles happen, but tomorrow this game will show what our chances in the group will be for the next games."

Georgia are yet to beat Ireland in nine attempts, although they have come agonisingly close in recent years and claimed a 1-1 World Cup qualifier draw in Tbilisi the last time the sides met in September 2017.

Ireland were perhaps fortunate to escape with a point that night and Georgia have been left to contemplate what might have been on more than one occasion as they have gradually closed the gap on the Ireland.

Weiss said: "Every game is not easy. In history, we lose or draw sometimes. But tomorrow, we will try to change this history and try to win because if we want to challenge in the group, we need some points from this game because we lost against the favourite in the group, Switzerland, at home.

"We will see tomorrow if we can do it. We know how we can play, but we must show that on the pitch." 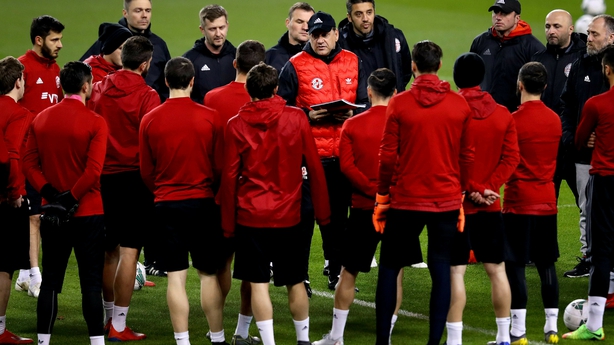 Ireland, of course, will have new manager Mick McCarthy at the helm, and that will present Weiss with a new puzzle to unravel after he previously locked horns with predecessor Martin O'Neill.

The former Slovakia head coach said: "A new coach every time brings something new to the team and new spirit, but I won't speak about it because Martin O'Neill was my good friend and he did an amazing job for the national team.

"He's a lovely, lovely guy. I love him so much and I wish him all the best at his club, and tomorrow we will see.

"It won't be an easy game, but we want to win and we will try to do our best. We want to attack, but I also couldn't beat Ireland with Slovakia - we had two draws and I have had one draw and one loss with Georgia. We will try to change that tomorrow."