Mick McCarthy said he might bring a tennis racquet with him to Lansdowne Road as Ireland take on Georgia at the Aviva Stadium tomorrow night.

The Ireland manager tried to make light of questions relating to the supposed fan protest at the stadium during the Euro 2020 qualifier, in relation to the off-field controversy surrounding FAI governance issues.

According to the Times Ireland, fans are planning to throw tennis balls onto the pitch to demonstrate their displeasure with plans for John Delaney to vacate his chief executive role for a newly created post of executive vice-president.

"It’s not going to help us play any better, that’s for sure, so hopefully that is not the case," said McCarthy, speaking at today's pre-match press conference.

"They are coming to watch a football match and they want us to win and give us the best chance, and that is getting behind us, and not having any outside influences affecting that.

"But I can’t do anything about it. Maybe I will take a tennis racquet with me."

Not wanting the issue to take over the pre-match press conference in Abbotstown. McCarthy then chose not to speak further about a hypothetical, while also asking fans to do their demonstrating elsewhere.

"I’m not just saying it now that I’m back in the job, they are the best fans, they are fabulous, so I’d just like them to come and support the team.

"If they have to demonstrate about anything, do it somewhere else and at another time, because we don’t want it to affect the performance. None of it is affecting the preparation by the way.

"We’ve come here to play a game. I don’t get involved in things I can’t affect and this is one of them." 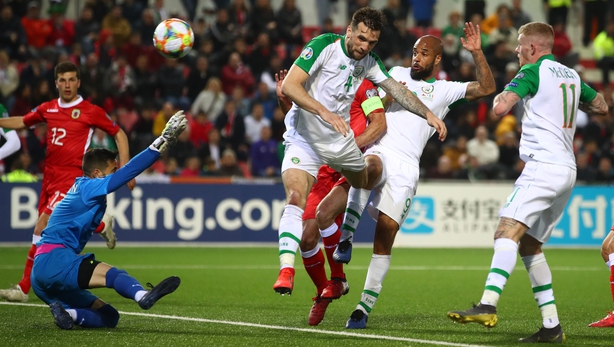 McCarthy appears to have a fully fit squad to choose from ahead of his first home game in charge, with the only concern over centre-half Shane Duffy who is nursing a sore ankle, following a challenge late in the Gibraltar game.

The centre-half sat out training this morning, and will go for a precautionary scan this afternoon, however, the manager did not appear too anxious about the injury.

"Shane has a sore ankle so we’ve just left him out today. He’s going to have a scan to see if there is anything serious; I don’t think there is.

The manager will give Duffy every chance to prove his fitness, however, he also feels that he has adequate cover should the Brighton defender miss out.

"I saw him at breakfast and he is a big tough fella and he said he would be fine. But I’ve said that myself in the past and it doesn’t always turn out to be that way.

"We’ll see. The scan is a precaution and he thinks he is going to be ok.

Follow Republic of Ireland v Georgia via our live blog on RTE.ie/sport and the News Now app, watch live on RTÉ2, or listen to live commentary on RTÉ 2fm.