Jamal Lewis has no regrets over his decision to play for Northern Ireland, insisting he never contemplated a Declan Rice-style switch once he had played his first match in a green shirt.

The 21-year-old left-back has earned six caps and some rave reviews from manager Michael O'Neill since making his Northern Ireland debut in a friendly against South Korea a year ago.

In a week that saw Rice make his England bow having previously played in three friendlies for the Republic of Ireland, the Luton-born Lewis said his commitment to Northern Ireland has never wavered.

"It was probably in my mind last year, but once I made my decision, that was it," said the Norwich player, who is eligible for Northern Ireland via his mum Katrina.

"Even the friendly game, obviously you can still play for another nation as Declan is doing, but once I played that first friendly for Northern Ireland, for me that was it. There was no turning back."

Lewis has established himself as first choice for club and country, helping Norwich move four points clear at the top of the Championship, and credits international football with fuelling his rapid development.

"Everyone is so welcoming and it's great to pick their brains," he said of his team-mates. "They are really helpful in training and in games.

"It's different to Norwich, but a good kind of different in terms of the different players you can get information off, and that's all I can do at my age, keep learning from players who play at such a high level." 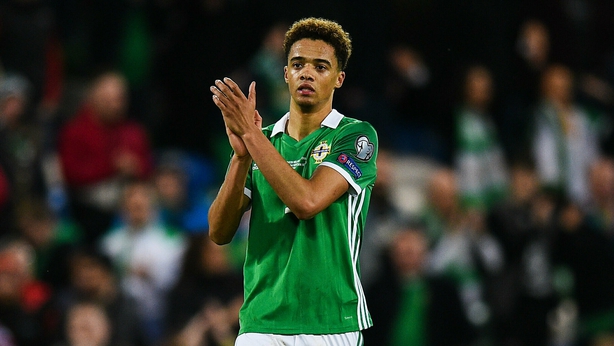 O'Neill has called Lewis the best left-back in the Championship, and the player himself hopes it does not sound arrogant to agree.

"It's always good to know you are doing your job," he said. "I try and pride myself to be the best left-back in the Championship.

"I think I'm the best left-back in the Championship. It helps playing in such a good team that has possession of the ball a lot.

"We play very expansive football at Norwich and allows me to get forward and show what I can do with the ball.
"That helps my game and I'm suited to how we play. Obviously with the team being top of the league helps too."

Lewis has already caught the eye of some of England's bigger clubs, but though he is keen to make the Premier League the next stage of his development, he wants to get there with the Canaries.

"I love it at Norwich," he said. "Being part of something this year has been really good at this early stage of my career. I've really relished it and just grabbed it with both hands.

Lewis enjoyed his first competitive win in a Northern Ireland shirt in Thursday's 2-0 victory over Estonia.
And he is now looking for a repeat against Belarus on Sunday before returning to the promotion race.

"I hope now to help get two wins for Northern Ireland and carry that forward into the league and it could be a successful season for me and the team," he said.