After reaching the World Cup semi-finals and the inaugural Nations League Finals during an unforgettable 2018, the Three Lions kicked off their Euro 2020 journey at the ground where the trophy will be lifted in 478 days' time.

Sterling netted three and won the first-half penalty converted by captain Harry Kane, with 18-year-old debutant Callum Hudson-Odoi getting away the shot that led Czech Republic defender Tomas Kalas to rather comically turn into his own goal as the match finished 5-0.

It was an impressive performance that provided yet another exciting glimpse of the future at a sold-out Wembley.

Jadon Sancho was handed his first competitive start at the age of 18 and the forward flourished in the spotlight, providing the final ball of a 25-pass move that Sterling tapped home at the far post.

Sterling won a first-half stoppage-time spot-kick, smashed home by Kane and the first competitive meeting of these countries was soon out of the Czechs' reach. 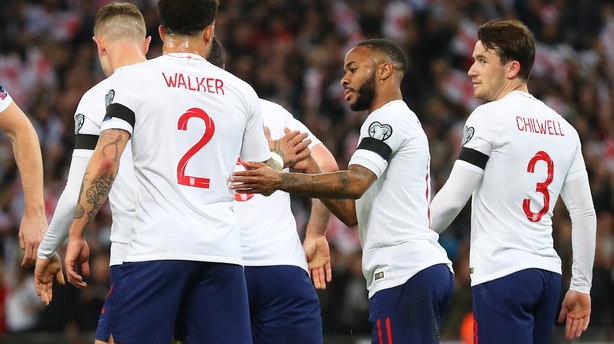 Sterling displayed a t-shirt paying tribute to 13-year-old Damary Dawkins, who died on Sunday after a battle with leukaemia, after netting the third, before completing his hat-trick as his strike went in off Ondrej Celustka.

Former Republic of Ireland international Declan Rice - subject of scrutiny after old social media posts appearing to show support for the IRA resurfaced - was on the pitch for his debut by the time the fourth goal went in.

Fellow new boy Hudson-Odoi helped wrap things up, with his shot leading to Kalas' own goal on the night he replaced Duncan Edwards as England's youngest ever debutant in a competitive game.

It was a superb start to Group A and saw under-fire Jordan Pickford keep the clean sheet he pledged to dedicate to World Cup-winning goalkeeper Gordon Banks in the build-up.