Dundalk looked like a side who are slowly moving into top gear, as they produced a ruthless display to see off Derry City at a packed Ryan McBride Brandywell Stadium.

Vinny Perth’s side, who struggled to defend Barry McNamee’s set-pieces and gave the Candystripes a host of chances, were clinical when in front of goal themselves.

Neither side created much in the opening quarter, until the champions sparked into life and should have taken the lead on 24 minutes.

Dane Massey broke down the left before finding an unmarked Hoban, but the striker’s close range header was somehow kept out by a fully stretched Peter Cherrie.

The home side went close just after the half-hour mark as McNamee’s 25-yard free-kick, was tipped over by Dundalk keeper Gary Rogers. 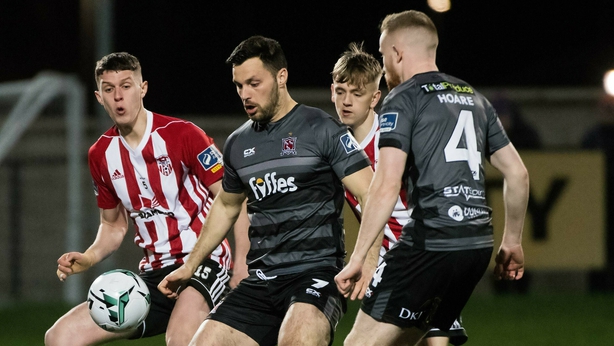 Minutes later the deadlock was broke in sublime style as Duffy’s left wing cross was headed down by Hoban straight into Sean Murray’s path, he chested the ball down and volleyed home from 10 yards.

Derry should have equalised on 44 minutes as McNamee’s in-swinging corner from the right found Ally Gilchrist inside the six yard box, but the centre-back could only manage to turn the ball over the bar, with the goal at his mercy.

Murray, with what turned out to be last involvement in the game, was inches away from adding his second of the night, but his 25 yard drive flew just wide.

Dundalk were rightfully awarded a penalty on 49 minutes when Cherrie took out Hoban, after the striker latched onto Sean Gannon’s centre just before the out-rushing net-minder fouled him.

After a lengthy stoppage, which saw Cherrie replaced by Nathan Gartside, Hoban eventually took the penalty on 52 minutes and made no mistake, blasting low into the bottom left-hand corner.

Moments later Dean Jarvis, who replaced Murray, should have added a third, as the visitors quick counter-attack cut right through Derry. Duffy skipped away from a few challenges before finding the unmarked substitute, who with the goal at his mercy, side-footed over from close range.

Neither side created much after that Rogers save, as the visitors showed all their experience to see out the rest of the game.

WATCH: Derry up and running with impressive win over Bohs