Gareth Southgate does not believe England new boy Declan Rice should have to defend his switch from the Republic of Ireland.

Southgate's comment was directed especially to both critics who have not "walked in those shoes" or former players that benefited from the rules.

Just eight days after FIFA ratified Rice's switch of association, and less than 24 hours after being named Ireland's best young player, he was included in the Three Lions squad for the upcoming Euro 2020 qualifiers against the Czech Republic and Montenegro.

The 20-year-old represented the Republic at youth and first-team levels but his three senior caps were for friendly matches, allowing the West Ham defensive midfielder to switch to his country of birth.

The London-born player's decision sparked debate - and in several cases backlash - but Southgate defended Rice after making a "complex decision" in a changing world.

"I think it's easy to be vocal when you haven't walked in those shoes," the England boss said.

"I think he spoke really eloquently about being somebody of dual heritage and what that means.

"For me it was easy, I could only play for England, so there was no question in my mind. And for lots of people that commented, that was the same.

"There were others who have commented, despite the fact that they didn't play for the country of their birth, so they've benefited from some of the rules that are there." 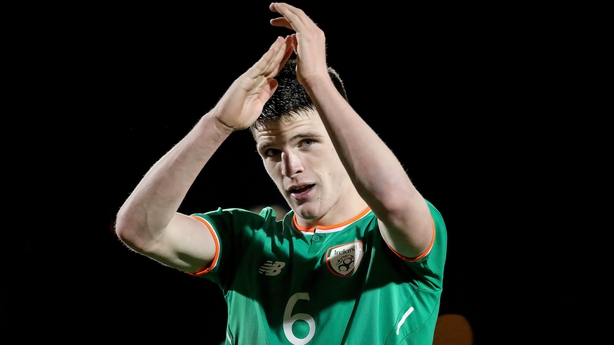 Preston-born former Ireland international Kevin Kilbane has been outspoken about Rice's switch and said it "makes a mockery" of international football.

Andy Townsend, who was born in Maidstone and represented the Republic, said the "rules are wrong", while former England striker Alan Shearer echoed such sentiments.

"Fundamentally, in this actual instance, he's a boy that was born in London and educated at an English academy," Southgate added.

"So, I don't think there's too much that he needs to defend but I understand the fact that there was a senior cap with Ireland, so that was always going to make it more complicated.

"But I think we've got to look at his age and normally a player of that age making this decision would be able to do it in a much lower-profile case, as was Michael Keane, as was Matt Targett who came from Scotland, as was the case with David Brooks who went across to Wales.

"So, I just think this is going to be increasingly part of the landscape because families are more transient.

"People will move countries because of family work and, as I said, there are over 50 per cent of our younger teams that will have dual heritage or maybe more than two countries they can play for, and that is just the nature of the world."

Southgate pointed to Alex Iwobi, Ethan Ampadu and Brooks as players that have gone onto play for other countries having represented England at youth levels, like Wilfried Zaha and Victor Moses before them.

On the other hand, defender Keane is now part of the squad and the England manager says former Republic youth international Jack Grealish could be part of his plans down the line.

As for Rice, Southgate likes his "increasing technical and tactical awareness" in midfield as well as his personality and on-field leadership.

Such attributes led the England boss and former Football Association technical director Dan Ashworth to visit Rice before last summer's World Cup, when they made it clear they saw an international future for him.

Southgate said he did not compare the achievements of England and Ireland in that meeting, instead focusing on how he saw the then-teenage defender as a player and where he might fit in.

"Then I gave him as much space as possible, occasionally calling just to say, 'look, we've not spoken but it's not because we're not interested, but other people will be talking to you a lot, so we don't want to be silent and (for you to) think we don't care'," Southgate said.

"It was really important that he had space because I knew that backlash would come.

"Maybe not everyone thought that might happen but I knew for sure that would happen.

"So he needed to be very certain in his mind that he was making the right decision and for the reasons that he's talked about."