The Birmingham City fan who ran onto the pitch and attacked Aston Villa captain Jack Grealish during Sunday's derby game has been sentenced to 14 weeks in prison.

Magistrate Alison Fisher said it had been an "unprovoked assault on a footballer who was simply doing his job" and that it had been witnessed by "many families, children and young people".

Fisher said the sentence must act as a "punishment and deterrent".

Mitchell was ordered to pay £100 to Grealish as compensation for the pain, discomfort and shock caused by the assault and was also hit with a £115 victim surcharge and £135 in prosecution costs - and given a fortnight to pay the total sum of £350.

Mitchell was also banned for life from Birmingham City FC, where he had been a 20-year season ticket holder, and banned from attending all football matches at home or abroad for 10 years.

Grealish had earlier said in court that he was "lucky" that Mitchell had not been carrying a weapon.

In a statement read into the court record by prosecutor Jonathan Purser, Grealish said: "I cannot help but feel how lucky I was in this incident.

"It could have been so much worse had the supporter had some sort of weapon."

Meanwhile, a Birmingham steward who appeared to try and knee Grealish after he ran into the crowd to celebrate with Villa supporters was spoken to by police but not arrested.

Birmingham have promised their own investigation into the steward's behaviour. 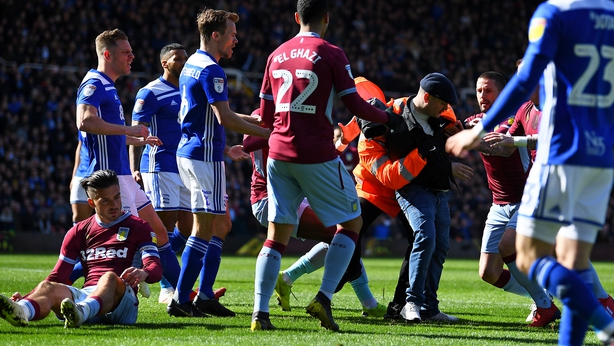 Professional Footballers' Association chief executive Gordon Taylor has called the attack on Grealish "disgraceful" and "cowardly" and believes the authorities must work with the government to help stamp out such incidents.

The incident involving Grealish was followed by a supporter pushing Manchester United defender Chris Smalling at Arsenal. On Friday, a supporter confronted Rangers player James Tavernier during their game against Hibernian at Easter Road.

After a spate of incidents, Taylor insists the authorities must "put a lid on the problem" quickly and he has called on the Football Association to work with the government, police and stewards at the grounds to help stamp out such behaviour.

"It was disgraceful, cowardly and criminal. We have seen an increase in such behaviour at clubs this season. It's been racist abuse, it's been anti-Semitism and now it's real fear for the safety of players," Taylor told Sky Sports News.

"From that point of view, we had a meeting just the other week with the Minister for Sport about engaging on this issue between the police and the stewards, which is crucial, and the responsibility of clubs about trying to get the right balance between educating supporters but also having sanctions to make sure we put a lid on it because we've been down this road before and we don't want to go there again and see the game threatened."

UK Minister for Sport Mims Davies called the incidents "a disgrace" and added: "It is right that they are investigated immediately and strong action is taken by the football authorities and clubs.

"Protecting players' safety is of paramount importance and every possible step must be taken to ensure that they are not put at risk."

When asked about what sanctions should be implemented, Taylor said: "That's a job for the Football Association, but it's also a job for the police when the culprits are caught because these are criminal acts.

"If it happened on the high street then severe action would be taken. There's no reason why that shouldn't be done just because it's a football ground.

"There's a combination of sanctions you can consider - fines, ground closures, playing games behind closed doors and points deductions. Every case needs to be looked at on its merits, but it has to be a job for the national association.

"I do believe it needs football getting together with government, as it has in the past, with the police and with stewards. I just feel it does need a coming together for us to deal with it."

Birmingham defender Harlee Dean told Press Association Sport after the match: "You should never fear for your safety on a football pitch and it's disappointing to see.

"There's a lot of hate amongst the fans and stuff, which is fine to an extent, but you shouldn't be able to come on the pitch and make contact with a player."

Former England striker Alan Shearer has warned players' lives could be at risk unless the authorities take urgent action to prevent pitch invaders and he wants the FA to come down hard on Birmingham to act as a deterrent.

"It is absolutely disgusting and if we don't stamp it out now, next time it could be a knife," Shearer said in his column in The Sun.

"If that means docking them points, playing in an empty stadium, so be it. There cannot be a strong enough punishment. It's completely ridiculous - I can't remember seeing anything as blatant as this."

Former Villa midfielder Lee Hendrie backed Shearer's calls for urgent action, telling BBC Radio 5 Live: "It could have been someone running on with a knife - how are you meant to stop this?

"Why do we need to wait for that to actually happen before someone gets really hurt? Imagine Jack's family sitting at the side and thinking about what could possibly have happened."

Meanwhile, United defender Smalling took to Twitter on Monday morning to reflect on what happened during his side's 2-0 defeat at Arsenal.

He said: "Commenting would only add to the attention he craved... Disappointed with yesterday's result but we'll learn from it. Looking ahead. Have a good start to the week everyone!"