Republic of Ireland midfielder Conor Hourihane slammed the "disgusting" behaviour of a Birmingham fan who charged on to the pitch and punched Jack Grealish at St Andrew's.

Grealish had the last laugh, firing home a 67th-minute winner for Aston Villa in a ferocious derby contest.

However the first-half flashpoint overshadowed the football, with players and pundits condemning en masse the mindless assault.

"The banter between the fans and the singing is all good, there was a fantastic buzz out there, but to have antics like that in the game is absolutely disgusting," said Corkman Hourihane.

"Full credit to Jack, he showed his class, got the winner and had the last laugh and it's a fantastic three points for us."

It was only Grealish's second game back from a long-term injury - he marked his return last week by scoring a stunning volley against Derby, while he also scored in November's 4-2 win over Blues at Villa Park.

"I've been thrown back in and I'm loving every minute," he said.

"I hope I've given them all a lift, captaining the club is something I've been dreaming of doing since I was a young kid.

"To do that and obviously score twice in these games this season ... lovely." 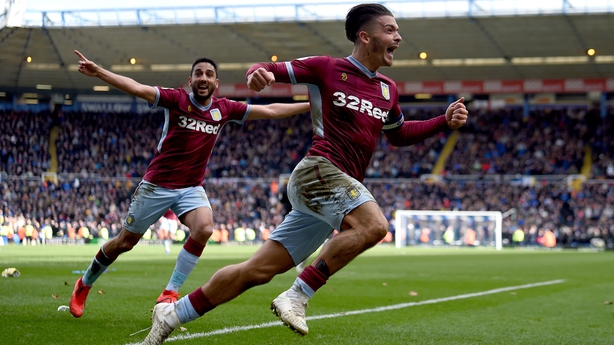 Of the incident itself, Grealish added: "I was just unaware at the time, I was walking into position and then just felt a whack around the side of the face.

"Obviously there's rivalry and stuff in football but I don't think there's any place for that really.

"I just tried to get on with my job. To score the winner was unbelievable, after what happened in the first half I think it was set up for it.

"Best day of my life. To come here, captain Aston Villa and score the winner is what dreams are made of, especially for me as a Villa fan."

"Aston Villa Football Club is appalled by the disgraceful attack on Jack Grealish during today’s game," it read.

"A red line has been crossed by this cowardly on-field assault on a player, which is unprecedented in English football.

"We trust the perpetrator will feel the full force of the law and the authorities investigate the circumstances surrounding today’s deplorable incident.

"Local rivalries are part of the fabric of the game however, as we are sure our friends at Birmingham City would agree, to have a player’s personal safety placed under such jeopardy is a serious cause for concern for the entire football community."