Tyler Toland's fantastic free-kick finds the @ArsenalWFC defender and she powers the ball home, no chance for the keeper! ??

A second-half header from Louise Quinn has secured victory for the Republic of Ireland over Wales in their second international friendly at Marbella.

The sides played out a goalless draw last week and this 1-0 win gives them a timely boost as they continue their preparations for the upcoming Euro 2021 qualifiers.

Arsenal's Quinn gave Ireland the lead just after the hour-mark when she finished the ball to the net with a powerful header from a Tyler Toland free-kick.

Toland delivered a perfect pass into the box as Quinn rose highest to connect with the ball, giving substitute goalkeeper Claire Skinner no chance with her effort.

The goal came after a lot of pressure from Ireland and they held on for the victory, after Wales looked to be the more dangerous of the two sides in the opening half.

Ireland women’s team have been drawn in Group I for the 2021 Euros and will face Greece, Montenegro, Ukraine and Germany in their qualification campaign. 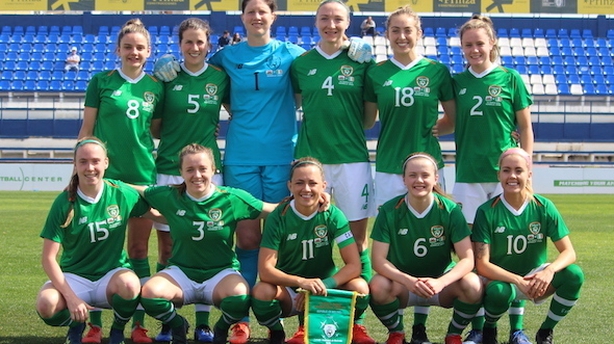 Ireland will begin their qualification campaign against Montenegro on Tuesday, 3 September before welcoming Ukraine on Tuesday, 8 October and a trip to Greece follows on Tuesday, 12 November.

In 2020, Greece will travel to Ireland on Friday, 6 March before Ireland head to Montenegro on Wednesday, 11 March.

Their next international friendly will be against Italy on 9 April.

Manager Colin Bell said: "It's a fantastic victory for the team and I'm absolutely delighted with the players. I felt we struggled with the Welsh press in the first-half but really kicked on after the break and deservedly won.

"It's been a great 10-day camp with the team, fantastic effort throughout from the entire squad and I would go so far as to say this is the best camp I've had with the team during my time here. The second-half performance was excellent, we had a number of brilliant phases of play and I'm delighted for the team to get the win.

"It's a huge confidence boost for the team of course, heading into those qualifiers in September. Wales are a second-seed so it shows we can mix it with these teams and get results against them, which is what we need to do to qualify for a major international tournament.

"The effort, the commitment and the desire from every single member of the team throughout was exceptional and we look forward to our next camp in April when we head to Italy."