Ivan Rakitic's fine first-half goal proved enough to give Barcelona a hard-earned 1-0 win over rivals Real Madrid at the Santiago Bernabeu as the LaLiga leaders continued their El Clasico dominance.

Barcelona had completed a 3-0 victory in the Copa del Rey semi-finals on Wednesday night and never looked like being stretched after Rakitic's clever chip broke the deadlock after 26 minutes.

Tempers almost boiled over at half-time when Lionel Messi looked to have been caught by a stray arm from Los Blancos captain Sergio Ramos.

There were, though, few clear-cut chances for Real, who are now winless in their last six league games against their rivals.

Barcelona are now 12 points clear of Los Blancos and 10 ahead of second-placed Atletico Madrid, who host Leganes on Sunday.

Real Madrid coach Santiago Solari had recalled Gareth Bale to the starting line-up while Thibaut Courtois returned in goal. Barcelona made one change as Arthur came into midfield. 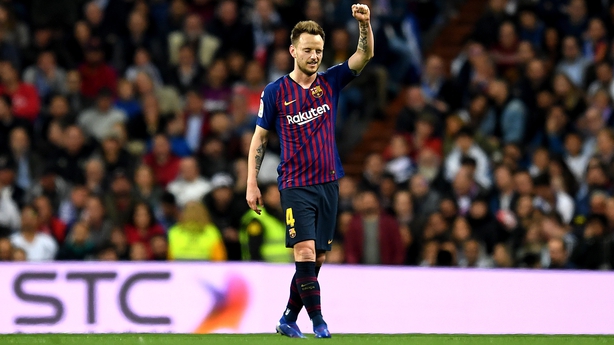 Bale had an early chance to get the home support back onside with a 25-yard free-kick but could only clip the ball high over the crossbar.

Real threatened again when a deflection took the sting out of Toni Kroos' shot as it bounced through to Barca keeper Marc-Andre ter Stegen.

At the other end, Courtois was forced into a flying low save to push away a fierce drive from Luis Suarez but the offside flag was up.

Messi then got in behind the Real backline and into the right side of the penalty area before clipping the ball over Courtois, only for Raphael Varane to make a saving block.

The Frenchman in turn fed Luka Modric, whose low shot was blocked by a sliding challenge from Gerard Pique.

Barca swept into the lead after 26 minutes when Sergi Roberto released Rakitic down the right.

The Croatian kept ahead of Ramos to coolly chip the ball over Courtois and into the far corner.

Los Blancos looked to step things up but could have fallen further behind when Messi's 25-yard free-kick curled over. 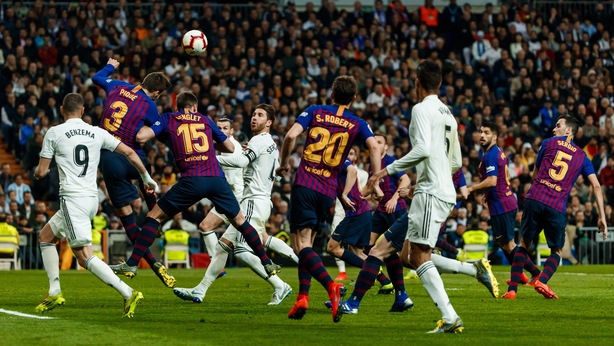 Rakitic then got Suarez away again, the Uruguayan testing Courtois with a drive, and the Belgium keeper was alert to gather Messi's follow-up.

Just before half-time, Modric sent a header over before tempers flared as Messi tangled with Ramos before appearing to be caught in the face by a trailing arm from the Real Madrid captain.

Referee Alberto Mallenco, though, took no action as the players left the field.

Early in the second half Benzema failed to connect from close range when the ball dropped to him at the far post, with the offside flag sparing the French forward.

Vinicius broke clear down the left before cutting inside and testing Ter Stegen with a curling shot. At the other end, a low cross from Jordi Alba deflected off Dani Carvajal and fell just wide of the far post.

As the hour mark passed Bale was replaced by Marco Asensio, to some jeers from the crowd, as the Wales forward took his place in the dugout.

Ousmane Dembele shot wide when played in by Messi before Isco was sent on to replace Casemiro as Solari made an attacking change for the closing 15 minutes.

Benzema tried his luck from distance late on but Ter Stegen made a comfortable save as Barcelona closed out victory.