Dominic Calvert-Lewin insists there is a conviction within Everton's camp that they can prevail in the Merseyside derby despite their recent dismal record in the fixture.

Everton have not beaten Liverpool in the last 18 attempts in all competitions - a sequence that stretches back to October 2010, when goals from Tim Cahill and Mikel Arteta gave the Toffees a 2-0 victory.

While their bitter rivals are in a full-blooded battle for the Premier League title with Manchester City, Everton, by contrast, seem destined for yet another mid-table finish despite a significant outlay on new players last summer.

They have not won back-to-back league games since October but Calvert-Lewin, who concluded the scoring as Everton swept aside struggling Cardiff 3-0 in midweek, remains optimistic ahead of Sunday's clash at Goodison Park.

The 21-year-old striker, who is yet to open his account against Liverpool in six previous appearances against them, said: "Everyone knows what type of occasion it is and I'm excited for it.

"Everybody wants to play in that game and I'm no different.

"The main focus is to win and that is how we have been preparing. We've got the belief.

"The Cardiff game was about making sure we got an important three points, and also building momentum going into Sunday's match. We did that, and we'll take confidence from it."

The Iceland playmaker scored in either half before Calvert-Lewin completed a comprehensive win in added-on time.

The win over the Bluebirds ended a three-match losing run for Everton and Sigurdsson admitted their patchy form in the last few months has proved a source of concern.

Marco Silva's men are currently 17 points off the top six, which is not a scenario Sigurdsson envisaged at the start of the season although he is hopeful of an upturn in fortunes.

He said: "It's been very frustrating but, through it all, the whole squad and the staff have been working very well, working hard.

"With the ability we have, with the manager and everything, we are disappointed with where we are at the moment.

"But if you put some results together you do climb the league so quickly. So that is what we are looking at - we are trying to look up the table and be positive about the situation and finish the season strongly.

"On Sunday, we have to put in a good performance, work hard and hopefully take care of the chances we get." 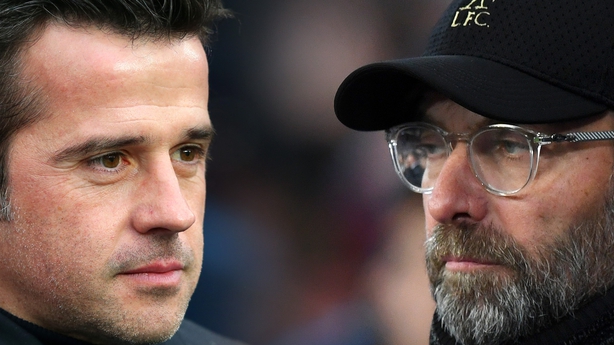 Meanwhile, Jurgen Klopp wants Liverpool to be more potent from set-pieces and for other players to chip in with goals to supplement the work of his prolific front three.

Of the rest, 10 other players have found the scoresheet but Xherdan Shaqiri is the next-highest scorer with six and the rest are on three goals or below.

Virgil Van Dijk trebled his tally for the season with a double in the 5-0 midweek drubbing of Watford and Klopp admits any contributions from defenders - and midfielders - will help as they try to hold off Manchester City.

The Holland defender accepted this week he needs to score more and Sunday's Merseyside derby opponents Everton present a realistic opportunity for him to do that.

A third of the league goals conceded by the Toffees this season have come from set-pieces and that area is viewed as one of weakness.

And Reds boss Klopp wants the likes of 6ft 3in Van Dijk to help the Reds increase the amount of goals they get from dead-ball situations.

"Of course you need goals from set-pieces, that's very important," said Klopp said. "You need to be ready in all departments. Set-pieces helped us especially in the beginning of the season quite a lot then it disappeared a bit.

"But now hopefully we can get it back. I love scoring from set-pieces, you have a lot of them in the game and you need to use them."

Van Dijk benefited from two crosses from either flank by full-backs Trent Alexander-Arnold and Andy Robertson.

The impressive Alexander-Arnold completed a hat-trick of assists in the match and with teams playing defensively against his side Klopp knows his defenders can provide an extra dimension.

"It's important. That's modern football. If you ask a young boy 'What's your favourite position?' I don't think a lot of boys will say 'I want to be a full-back!"' he added. "But football has changed. They became much more important.

"In that (Watford) game it was exceptional. I don't think I was ever part of a game where somebody had a hat-trick of assists. It was special.

"He (Alexander-Arnold) wanted the match ball, so he got it. Now let's try to do something like that again."

Sadio Mane, playing in a central role with Roberto Firmino injured and still a doubt for Sunday, also scored twice in that game.

His 14-goal tally is his best in the league since arriving at Southampton from RB Salzburg in 2014.

"Sadio is coming to an age where things are becoming more natural for him. He's not having to convince people now," said Klopp, who is looking to extend his unbeaten derby record to eight matches.

"We all know that he's a world-class player, and he has started realising that for himself.

"Mix it up with his attitude and his work-rate, it can be a really decent career - even better than it was to now.
"He's in a good moment of his career, and he's in the best age group now, which they all are."

Liverpool are unbeaten in a record 16 derbies, have lost just one of the last 24 in the league and if they avoid defeat on Sunday they will set a club-record of eight games unbeaten in succession at Goodison.