The Republic of Ireland's Megan Campbell is relishing life back in the international set-up ahead of Thursday's international friendly against Wales.

The 25-year old was named in Colin Bell's 20-player squad for the friendly double-header in Marbella, Spain for the first-time since October 2017.

During a UEFA Champions League match for Manchester City against LSK Kvinner FK in November 2017, Campbell suffered an anterior cruciate ligament injury. The injury kept her out until the start of this month when she made her comeback against Watford in the FA Women's Cup.

Now back in the WNT squad, Campbell is determined to take advantage of the opportunity in the two friendly matches against Wales.

"It's fantastic to be back. It's been a really long road to get here and ready to get back to representing club and country now," she said.

"I've had a lot of ups and downs. There were a lot of lonely days in the gym and having to get over the injury both physically and mentally has been extremely difficult. 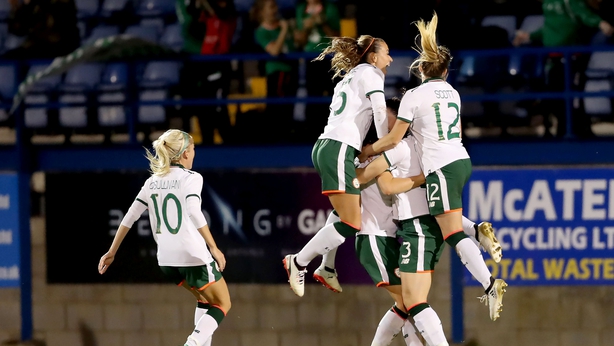 "It was always great to have contact from Colin during my injury lay-off as he always made sure I felt involved which was really important for me and I can't wait to get back playing now. It was really difficult to watch the rest of the campaign in Norway and the Netherlands but I'm ready to kick on now."

Ireland found out their UEFA 2021 European Championships qualifying opponents last week as they face Germany, Ukraine, Greece and Montenegro in Group I.

With the opponents now confirmed, Drogheda native Campbell believes it puts an extra importance of the performances in the upcoming friendly matches.

She added: "They're going to be two tough games against a really good Wales side. They're second seeds in their group and it is always a really good game between us two.

"I've been really impressed with the training sessions, we're really moving the ball well and I feel as though the quality has definitely gone up since I was last in. Knowing who is in the group now definitely puts some extra importance on getting the results we need.

"We want to go into qualifying in September full of confidence and belief that we can qualify for a European Championships so we need to make sure we're at our best. I can't wait personally, I just want to be back out there."

Team news: Defender Diane Caldwell is a doubt for the first international friendly match against Wales through injury.