Mounie forced home a rebound in the first minute of time added on to halt the Terriers' run of five straight defeats and secure them just their third win of the season.

Huddersfield, who had taken only one point from their previous 14 matches, also secured their first points under boss Jan Siewert.

Town fans will wish they could play Wolves every week as their last win, on 25 November 25, was at Molineux.

Karlan Grant, one of eight changes in Huddersfield's starting line-up and making his full Premier League debut, had the first attempt on goal in the 19th minute.

Grant, a £1.5million January signing from Charlton, injected much-needed pace into the Terriers' attack and Siewert's revamped side certainly displayed renewed energy in the opening quarter.

Diogo Jota skipped round 20-year-old Town debutant Demeaco Duhaney far too easily and crossed to the far post, where the unmarked Doherty mis-kicked his attempt on goal.

Jon Gorenc Stankovic, making his second league start for Town, summed up his side's season in front of goal when he shot tamely wide as both sides continued to wrestle for control.

Duhaney's debut ended prematurely at half-time due to a knock and he was replaced by Juninho Bacuna and the Terriers threatened soon after the restart. 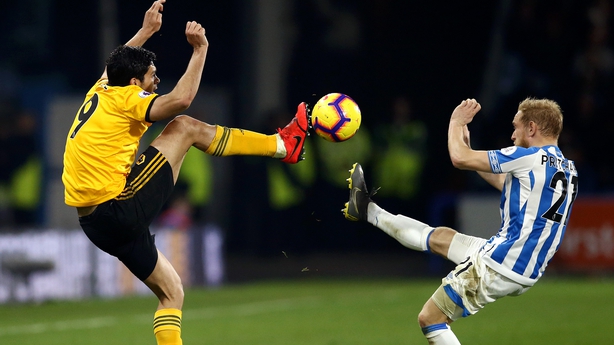 Mounie then headed wide from Bacuna's lofted pass, while Wolves did not threaten again until the 66th minute when Boly's header cleared the crossbar.

Ivan Cavaleiro stepped off the bench to make his 100th appearance for Wolves and Morgan Gibbs-White was also sent on, with Joao Moutinho and Diogo Jota making way.

Mooy pulled a left-footed shot from the edge of the area wide minutes later and Stankovic was given a standing ovation when he was replaced by Elias Kachunga.

Kachunga went close to breaking the deadlock as he curled a shot wide, but Huddersfield refused to settle for a point and were rewarded in the first minute of added time.