Chelsea head coach Maurizio Sarri will make a decision whether to start Kepa Arrizabalaga in Wednesday's Premier League clash with Tottenham based on the best interests of his squad.

Kepa refused to be substituted in Sunday's Carabao Cup final with Manchester City, which the Blues lost on penalties, and was on Monday fined one week's wages by the Chelsea board for the incident, which angered Sarri.

"It will be a decision for the group. For all the players," Sarri said. "I want to send a message to my group. The message could be: Kepa is on the pitch or Kepa is off the pitch. I have to decide what is better for my group."

Sarri says the goalkeeper must be mentally ready to play, but paused to consider his answer.

Kepa had missed last Thursday's match with Malmo due to a hamstring problem and twice required treatment in extra-time, leading to Sarri's decision to replace him.

Sarri says he made the call due to fitness concerns, coupled with Willy Caballero's history with Manchester City. The former City player saved three penalties in their 2016 League Cup shootout win over Liverpool.

The Blues boss did not entertain the possibility that Caballero's presence may have resulted in a different outcome.

Should Kepa be omitted, with Caballero deputising, it would likely continue a furore which Sarri tried to draw a line under on Tuesday, albeit unsuccessfully.

Sarri added: "After yesterday for me the situation is finished. He is a young player, he made a mistake, but stop. I am sure he understood he made a really big mistake. For me it's finished.

"I spoke with the goalkeeper, with Kepa, of course. Then we spoke altogether, because he said sorry to the technical staff, but it was not enough.

"Then he said sorry to his team-mates, to the club. I think he made a big mistake, but we need to be tolerant. We don't want to kill him. So there is a position from the club."

Sarri initially interrupted questions on Kepa, insisting not everyone was interested, saying: "Everybody? No. In my family, no."

Chelsea had lost 6-0 to Manchester City on February 10 in the Premier League and stifled their opponents, forcing the shootout.

Sarri believes the performance at Wembley showed he has his players' backing after a series of poor results, with the Kepa incident strengthening his resolve.

"Did you see the match on Sunday? So, you have the answer," he said when asked whether he has the support of his players.

Asked if he felt the support of the players was now greater, Sarri said: "Yes." 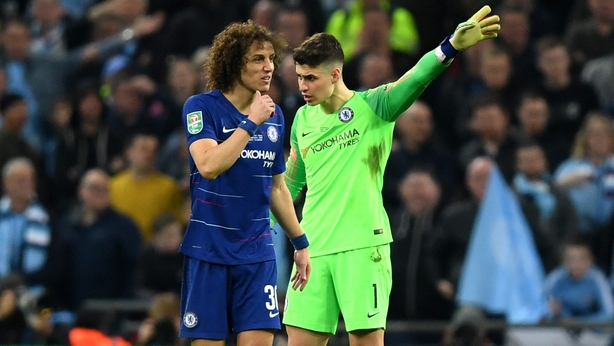 "I have thought a lot more about yesterday's events," Kepa, who broke the transfer record for a goalkeeper when he joined the Blues in August, said on Monday.

"Although there was a misunderstanding, on reflection, I made a big mistake with how I handled the situation.

"I wanted to take the time today to apologise fully and in person to the coach, to Willy, my team-mates and to the club. I have done this and now I want to offer the same apology to the fans.

"I will learn from this episode and will accept any punishment or discipline the club decides is appropriate."

At the height of the Kepa situation, Sarri walked down the tunnel and appeared poised to leave the arena before returning.

"I needed one minute to return calm," Sarri said.

The Blues boss' position remains precarious ahead of the first Premier League game since the 6-0 loss at Manchester City on 10 February 10.

Sarri added: "I am not under pressure. For me the pressure is a normal pressure."