Mauricio Pochettino blamed the disappointment of a massive blow to Tottenham's Premier League title chances for his post-match outburst at referee Mike Dean.

As the Spurs boss walked across the Turf Moor pitch following the 2-1 defeat by Burnley, Pochettino became engaged in a lengthy and heated exchange with Dean, who remained calm.

Pochettino's Spanish assistant Jesus Perez jabbed his finger towards the face of Dean while the Argentinian was eventually led away by Burnley defender Phil Bardsley.

Pochettino did not reveal what was said or the reason for the strength of his feelings, with the only really contentious decision appearing to be the awarding of a corner that led to Chris Wood's opening goal.

"We need to find someone to blame, it is myself and us because we have in our hands the capacity to win the game and we didn't," said Pochettino.

"I said for me this game is going to be key to put pressure on our opponents. If we didn't win, we cannot put pressure and we cannot think now of being a real contender. It is a massive opportunity lost for us.

The outburst was out of character for Pochettino, who could now find himself in hot water with the Football Association. 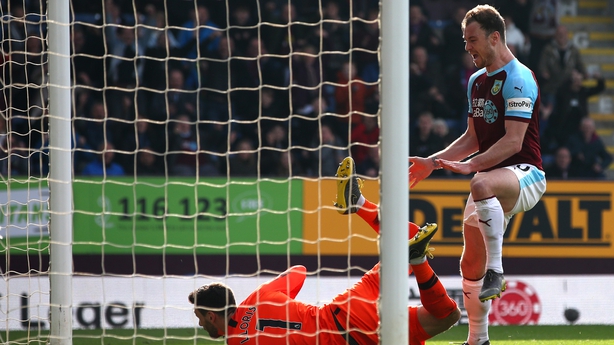 He said: "It is true. One day there were crossed cables inside my brain. It was weird and strange and has not happened before in 10 years.

"Some stupid things happen and you react. I was never out of control but now I need to find the result. We lose the game because of us, not because of excuses. We didn't deserve to win. We shot maybe one more time than Burnley but it is not enough."

Asked if he would apologise to Dean, Pochettino added: "Yes, maybe, good point. Maybe I go."

Victory for Spurs would have seen them close to within two points of Manchester City and Liverpool at the top of the table, but they could now find themselves eight points behind Jurgen Klopp's side, who face Manchester United on Sunday.

It is a huge week for Spurs, who also face Chelsea and Arsenal, and Pochettino added: "For me, that was the big game.

"Of course we will put pressure on and try and win because we try to fight to the end. Maybe we are heroes winning in Stamford Bridge and beating Arsenal but it is the same feeling when we lose a game to Watford. It is in our hands.

"We can beat Chelsea and Arsenal but, if you want to make history, you must win these kinds of games. It is not about tactics, or selection. You have to come here and fight."

Burnley boss Sean Dyche praised the officials, although he was unhappy with Spurs' equaliser, when Danny Rose took a quick throw from a position well forward of where the ball went out, allowing Harry Kane to break away.

The victory made it eight games unbeaten in the league for Burnley, who provisionally moved six points clear of the relegation zone.

"It is as effective a performance as we have had all season," said Dyche. "We kept asking questions all afternoon. It was very pleasing. The top sides have a way of controlling the game and we didn't allow them control."