Danny Mandroiu scored a truly brilliant goal to help make it two wins from two for Bohemians as Keith Long’s side had too much for the newly promoted Students in their SSE Airtricity League Premier Division clash before a crowd of 1,609 at the UCD Bowl.

Dinny Corcoran rowed in with another superb strike as the Gypsies’ took control of the game inside three first half minutes.

The victory sets up an early top of the table clash on Monday when Shamrock Rovers visit Dalymount Park in the big Dublin derby.

It might have been as little different as Bohemians should really have been a goal down inside 26 seconds.

UCD worked the ball wide left to Neil Farrugia whose low cross picked out Jason McClelland who ought to have done far better than side-foot wide of James Talbot’s goal.

Bohemians soon settled, though, knocking the ball around promisingly, before carving their first opening on six minutes.

Keith Ward’s diagonal ball found the run of skipper on the night Keith Buckley whose looping headed dropped just over the home crossbar.

Some frantic defending was then needed by UCD as they were caught cold from a quick free kick on 16 minutes.

Mandroiu cleverly dinked the dead ball over the top. Corcoran availed of hesitancy by Conor Kearns in the UCD goal to see his cross cleared hacked by Liam Scales. 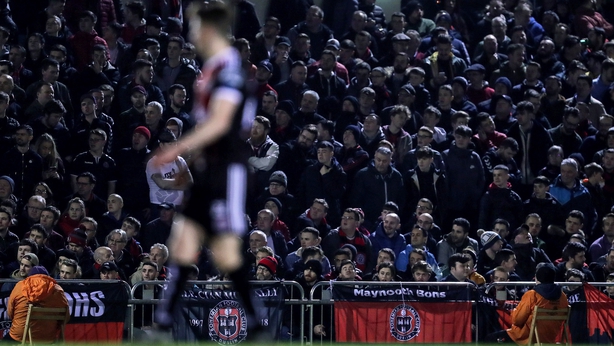 But it was the sparkle of Mandroiu that would really light up the game on 29 minutes with a cracking lead goal for the visitors.

The former Ireland youth international, man-of-the-match in last week home win over Finn Harps, did it all himself.

Picking up the ball on the left, the 20-year-old waltzed inside, skipping past several defenders, before striking a sumptuous right-foot drive from 20-yards that arrowed to the top corner of the net off the underside of Kearns’ crossbar.

It got better for Bohemians three minutes later as they doubled their advantage.

Showing tenacity in bustling through the challenge of Daniel Tobin, left-back Paddy Kirk’s cross picked out Corcoran in the middle.

The big striker scored a scrappy winner last week. But this goal was a thing of beauty as he met the delivery with a stunning left-foot volley to find the corner of the net.

UCD worked hard to get back into the game from the resumption with skipper Gary O’Neill testing James Talbot from a free kick early on.

Further chances were few and far between as Bohemians generally defended well.

McClelland was presented with an opening inside the area on 76 minutes, bringing a good save from Talbot.

And the Bohemians keeper was there again five minutes later to turn a Conor Davis effort round a post.

Classy Bohemians see out the season with another win