Furious Steve Clarke accused the Rangers support of living in the Dark Ages after being targeted with sectarian abuse during his side's William Hill Scottish Cup pummelling by Rangers.

Chants of "sad Fenian b*****d" echoed round Ibrox as the home side booked a quarter-final clash with Aberdeen with a 5-0 win.

Gers ace Alfredo Morelos struck four times on his return from suspension but Killie's hopes were over as soon as keeper Daniel Bachmann was dismissed for an off-the-ball clash with Glen Kamara.

Clarke could barely contain his disgust with referee Alan Muir over the decision as he branded the sending-off a joke.

But he saved his fiercest condemnation for the home faithful as he hit back in a withering blast.

"It's lovely being back in the west of Scotland, really nice," said the former Chelsea defender.

"When I was approached by Rangers about taking over the job here I was assured that 'we don't have that in the west of Scotland any more. It's gone'.

"They are not allowed to call my assistant [Alex Dyer] as black 'b' but they can call me a Fenian b*****d. What are we doing in Scotland?

"I wake up every morning and thank Chelsea for coming and taking me away from the west of Scotland because my children don't understand this. Thankfully when I go down there my children, my grandchildren don't have to worry about this. So, fantastic to be back in Scotland." 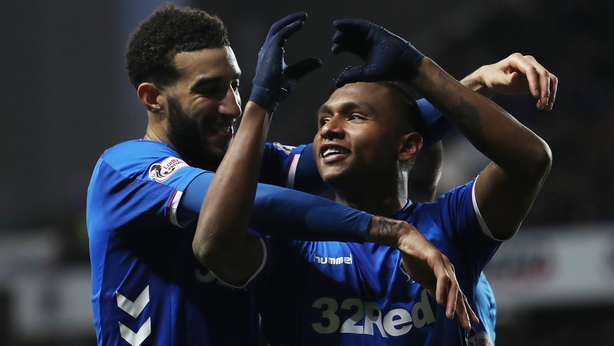 Clarke had no doubt about the matter and continued his rant as he savaged Muir over his decision to send-off Bachmann after the keeper was accused of elbowing Kamara at a corner 25 minutes in.

He said: "If the penalty had been given in the first two minutes it would have been different. The red card is a joke.

"If that's the standards we might as well go home. Why speak? It's every week.

"You'll probably write about Morelos' four goals but the officials decided the game. It's embarrassing.

"The goalie just lifted his arms. Every goalie does it every week. It's embarrassing. How can I talk about football tonight?"

Morelos gave Gers the lead just seven minutes in and took advantage of his side's numerical advantage to grab another on the stroke of half-time. Substitute Andy Halliday netted number three after being introduced with a quarter of an hour left while another two goals from Morelos late on took the Colombian's tally for the season to 27.

The win was just the response Gerrard was looking for after admitting his side's title hopes were over following last Saturday's draw with St Johnstone.

He said: "The fans and myself got the reaction we were looking for. The players won the fans back over after the weekend. People will talk about the man advantage but I thought we were super when it was 11 against 11.

"We got in front and I thought we built on that lead. The ref sent the keeper off then we never rested on our laurels. We kept going all the way and that's what pleased me the most."