Pep Guardiola has urged Manchester City to impose themselves on opponents to prevail in the Champions League.

Quadruple-chasing City's European campaign resumes as they face German side Schalke in the first leg of their last-16 tie at the Veltins Arena tonight.

Guardiola said: "We have many dreams in our head. It's important to score goals - the minimum one goal - but you can't go through if you are not yourself if you don't do your best performance.

"If you want to dream, go through to the last stages, every single second you have to be incredible - impose your game, to be ourselves. That is what I want to feel."

Schalke have struggled to live up to expectations after their runners-up finish in the Bundesliga last season and are currently toiling in 14th.

Former Bayern Munich boss Guardiola said: "I think the quality is there. I know Schalke are always fighting. From my period here, the expectations are high.

"They could not always accomplish it but last season they did it, qualified for the Champions League. That is an incredible success.

"It is two games - the quality is there. [People say] 'City are top of the league, City have to win - how many? Four? Five?' That is not going to happen.

"It is real tough. The players know that. We are going to try to play a good game to get a good result and finish the job in Manchester." 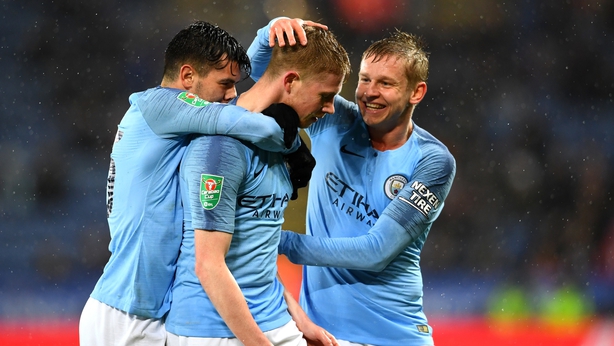 Guardiola was speaking at City's pre-match press conference in nearby Essen alongside playmaker Kevin De Bruyne, who played down talk of winning the quadruple.

The Belgium international said: "I think the goal is not to win the four competitions. The goal is to win every game and then the further you progress.

"We want to do well and go to the quarter-finals, so we are one step closer to winning it. But to set standards to win all four - that's nearly impossible."

De Bruyne feels some opponents may have wised up to City after last season's record-breaking Premier League success, but that should not deter them from the end target.

He said: "I think other teams figure out what we do, maybe, a little bit better. Maybe it's not the same as last year but maybe we'll win more titles this year.

"The most important thing is titles. If we win three titles we will have done better than last year."

City will be without striker Gabriel Jesus and defender John Stones due to hamstring and groin injuries respectively but neither problems are thought to be serious. Captain Vincent Kompany has travelled after a muscle problem while City could come up against their former Academy winger Rabbi Matondo, who left the club for Schalke in the summer.