Kilmarnock have reacted with "dismay" to the behaviour of Celtic fans in Sunday's game at Rugby Park after Kris Boyd was struck by a missile and other players were "confronted" on the pitch.

Boyd had earlier warned that someone could be seriously injured after he was hit in the arm with a coin as he warmed up during his side's 1-0 Ladbrokes Premiership defeat.

A number of Celtic fans spilled out of the stand to celebrate with Scott Brown after a late winner from their captain, who received a second yellow card for his part, while photographs of damaged seats emerged after the game.

In a statement, the Ayrshire club said: "The board of Kilmarnock Football Club wishes to express its dismay at a number of events which occurred during yesterday's game against Celtic.

"During the course of the match our club captain Kris Boyd was struck by a missile thrown from the crowd, a number of Chadwick and Moffat Stand seats were damaged or broken while some Celtic supporters invaded the field of play and confronted our players.

"We condemn all of these incidents in the strongest possible terms and reiterate that the safety of all players, staff and supporters is paramount at all times.

"Under SPFL Rule H40, Celtic FC will be required to pay for the damage caused to Rugby Park.

"Over the course of the day, initial investigations have begun and we will be seeking meetings with Police Scotland and G4S.

"Kilmarnock FC is a family club and as a board we continue to work hard to ensure Rugby Park is a safe and welcoming environment for families to enjoy watching football.

"We will work with a number of parties, including our leading supporters' groups, to explore all options to fulfil this goal and maximise the number of Kilmarnock fans cheering the team on at all home matches." 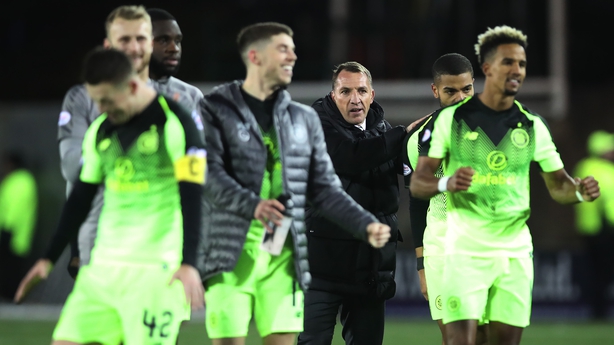 Boyd earlier wrote on Instagram: "We're lead to believe they're the Greatest Fans in the World!! Wrecking seats, flares and invading the park!

"The shouts and abuse I can handle as a bit of banter even tho if others it would be sectarianism.

"Getting hit with a coin, though, is a step too far.  Don't worry, I wasn't injured but if it doesn't stop someone will end up with a bad injury.

"Thought those days in (British) football were over."

Boyd found some humour in the situation on Monday morning as he sported a a bandage and a sling in a photograph on social media.

The 35-year-old, whose team face Rangers in a William Hill Scottish Cup fifth-round replay this week, joked: "50/50 for the game on Wednesday."