Manchester City kept their quadruple hopes alive with a 4-1 win at Newport to reach the quarter-finals of the FA Cup.

Former Sligo Rovers and Shamrock Rovers man Padraig Amond maintained his record of scoring in every round for Newport two minutes from time, but hopes of a dramatic comeback were brief as Foden's second and Mahrez finished the job.

City had scored 12 goals without reply against Rotherham and Burnley to reach the last 16, but it was never going to be as straightforward away to County hosts who have made a habit of embarrassing bigger clubs.

Newport have beaten Leeds, Leicester and Middlesbrough, as well as drawing with Tottenham, at Rodney Parade in the last 14 months and they again emerged with credit for frustrating City for so long.

County manager Michael Flynn reckoned a home win would represent the biggest upset in the history of the competition, surpassing famous giant-killing acts administered by the likes of Colchester, Hereford and Wrexham. 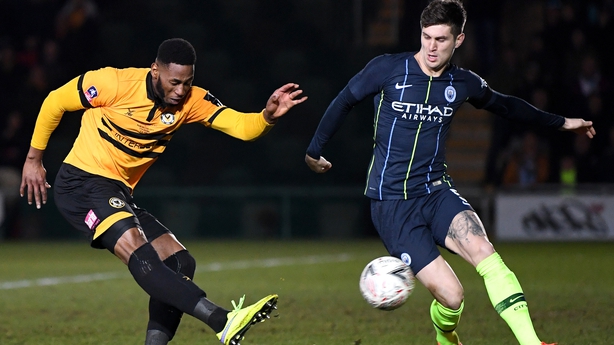 Whatever the truth of that, there is no dispute that these two clubs reside in different worlds.

Even without the likes of Sergio Aguero, Kevin De Bruyne and Raheem Sterling - the latter two were on the bench - City's starting line-up cost around #320m while Newport's was a modest #50,000 spent on goalkeeper Joe Day and striker Amond.

The homely surrounds of Rodney Parade would also have been a shock to the system of City's millionaires used to playing at the world's grandest stadiums.

Temporary seating at both ends of the ground had lifted capacity close to 10,000, while a pitch shared with the Dragons and Newport rugby teams was understandably bare in places after being used more than 60 times this season.

City, predictably, dominated possession - touching nearly 90 per cent in some periods of the game -  but the visitors only had to cast their minds back to last season's fifth-round defeat at Wigan to know the potential pitfalls. 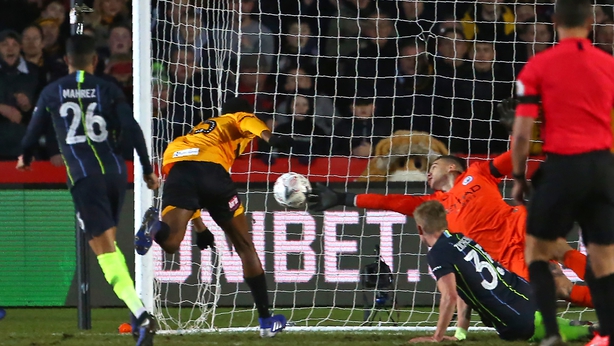 Mahrez and Fernandinho had early sights of goal, but Pep Guardiola's pre-match fears about Newport's set-piece strength manifested themselves after 14 minutes.

Jamille Matt flicked on Mickey Demetriou's towering throw and Tyreeq Bakinson, arriving unmarked at the far post, seemed certain to put himself on the scoresheet.

But Ederson showed incredible reactions in the City goal to dive to his right and claw the ball to safety.

Joss Labadie flashed a half-volley wide as County managed to play more of the contest in the City half than many might have envisaged before kick-off.

But City continued to probe, with Day twice shovelling out Mahrez efforts and Sane striking the crossbar after he had worked a clever one-two with David Silva.

Sane also saw a penalty claim turned down after Mark O'Brien had blocked his drive with an arm that appeared in an unnatural position. 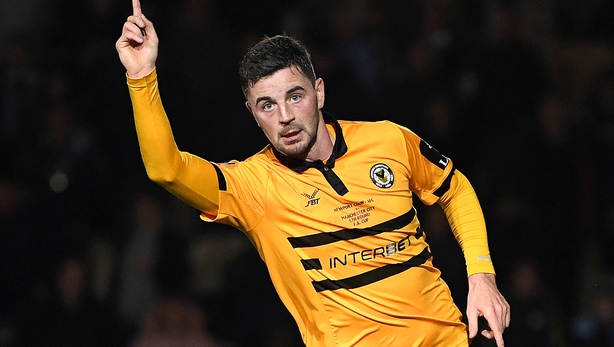 That escape saw Newport become only the fifth side this season to deny City from scoring in the first half, but parity lasted only six minutes after the break.

Gabriel Jesus took advantage of O'Brien's stumble and fed Sane, whose powerful drive went in off the face of Day and left the Newport goalkeeper with a bloodied nose.

Guardiola led the applause on the touchline and City almost doubled their advantage immediately when a crisp passing move ended with Danilo firing against a post.

Newport were now in danger of being hypnotised by City's passing patterns and Foden advanced unchecked from the halfway line to the edge of the area to fire under Day's body.

Amond gave the home fans a goal to remember when he chipped the ball over the stranded Ederson.

But hopes of a grandstand finish evaporated as Foden displayed his obvious talents again with another jinking run and shot and Mahrez produced another clinical finish in stoppage time.