Dinny Corcoran started where he finished last season by finding the net to get Bohemians’ 2019 SSE Airtricity League Premier Division campaign off to a winning start.

The big striker hit 12 league goals last year, the last on the final day in a 1-1 Dalymount Park draw with champions Dundalk.

And the 30-year-old did his work in front of goal once again with the only strike of this fitful clash with newly promoted Finn Harps.

Ward’s clever ball in behind found striker Corcoran minutes later, but the he scuffed his shot on the turn as Harps cleared.

Caolan McAleer, back at the club following a stint at Sligo Rovers, showed pace and skill to carve newly promoted Harps’ first opening, rifling his shot across the face of the Bohemians goal.

Bohs then survived Harps’ first set-piece threat 20 minutes in as the visitors, with skipper Gareth Harkin, Jacob Borg and Sam Verdon working hard in midfield, settled to play their way into the game.

New signing Daniel O’Reilly met Harkin’s free kick to see his downward header come back off the butt of a post.

The game went a little flat thereafter before Bohemians created something from nothing on 38 minutes.

Three minutes later the most incisive move of the half had the home side ahead for what proved the game’s only goal.

Corcoran initially stepped over Ward’s diagonal pass to allow the ball through for the run of Keith Buckley.

The low cross was then turned home by Corcoran, in off a post.

Harps had goalkeeper Peter Burke to thank on the double just before the hour mark as Bohemians piled the pressure on the visitors’ defence.

First Mandroiu worked a one-two with Ward to force Burke to get down smartly to his right-hand post to push a low drive out for a corner.

From Ward’s floated delivery, Rob Cornwall then somehow contrived to head wide from just yards out.

A minute after that, skipper Derek Pender’s cross found Ward who saw his low drive saved at the post by Burke.

Burke was there again to rescue Harps on 65 minutes, getting down to save Levingston’s tame shot after Mandroiu played in him. Corcoran skied the rebound over the crossbar. 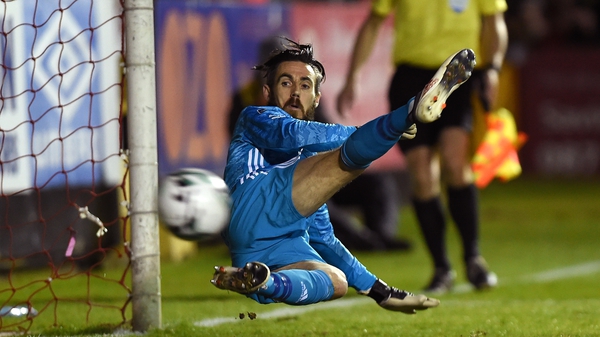 Watch: Cork City pay the penalty as Pat's open with a victory