Vinny Perth's first league game in charge of Dundalk proved to be a frustrating one as Liam Buckley's new-look Sligo Rovers did enough to leave Oriel Park with a hard-earned point.

Perth, who took over from Stephen Kenny before Christmas, opened his programme notes with the word 'continuity' and it was reflected in his team selection with the 42-year-old naming the same XI that started last November's FAI Cup final win over Cork City at the Aviva Stadium.

Sligo made the trip east with eight new faces in their squad. Six of them started with Bermudan Dante Leverock at the heart of Buckley's defence but an ankle injury saw Ronan Murray, a winter capture from Dundalk, ruled out.

Last year's double winners started with intent and they had a great opportunity to pull ahead in the 11th minute when Ed McGinty clattered Robbie Benson in the penalty area. The challenge brought the midfielder's evening to a premature end but McGinty, who saved a Patrick Hoban penalty in the same fixture last October, got down to deny 2018's top scorer yet again. 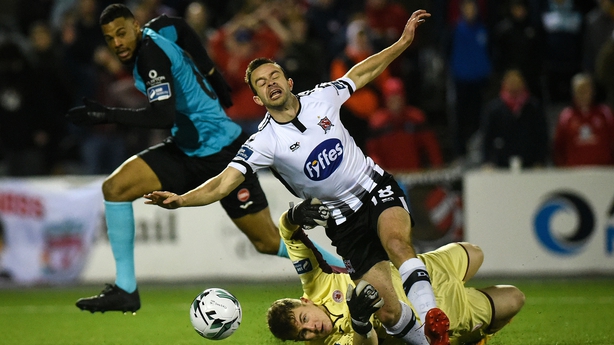 Benson was replaced by Sean Murray and the former Watford midfielder went close to marking his SSE Airtricity League debut with the opening goal in the 26th minute. Dane Massey was the provider but Murray's downward header bounced off the turf and flew over the bar.

With Sligo content to try and hit on the counter attack, Dundalk continued to apply the heat but they were thwarted again by McGinty when he clawed Hoban's 39th-minute header away after the striker was picked out by a sensational Murray pass.

Patrick McEleney then saw a free-kick kiss the outside of the post with McGinty rooted to his line before Sligo landed a sucker punch in the 43rd minute when Keaney's right-footed free-kick beat a three-man wall and squeezed inside Gary Rogers' near post to give Buckley's side a shock lead at the break.

Parity was restored just four minutes after the restart when John Mountney chested a Dane Massey cross ball down for Hoban and his lay-off fell invitingly for Murray who made no mistake, rifling a sizzling effort into the bottom corner.

Romeo Parkes and John Mountney both squandered good openings at either end before Hoban flashed a left-footer over the top after escaping the clutches of Leverock.

The traffic flowed in one direction as the half wore on and Murray was denied by McGinty again while Sean Gannon and substitute Georgie Kelly also went close.

The visitors, though, with Leverock and John Mahon throwing themselves at everything, stood firm and they even had a sniff of taking all three points late on when Liam Kerrigan broke on the inside right but his effort was saved by Rogers.