Celtic will need to produce some magic in the Mestalla Stadium next week following their 2-0 Europa League defeat by Valencia at Parkhead.

Russia international Denis Cheryshev scored for the well-drilled visitors three minutes before the interval in the first leg of the last-32 encounter.

It was the first goal the Scottish champions had conceded at home since the 2-1 win over Salzburg two months ago and the second came in the 49th minute when debutant striker Ruben Sobrino knocked in a cross from Cheryshev.

The Spanish side controlled most of the match after that to hand Brendan Rodgers' side their first defeat of 2019, ending a run of seven straight wins, and leave the Scottish champions all to do and more in Spain next Thursday.

Celtic, who had fit-again left-back Emilio Izaguirre back in the side, started with purpose.

Lato had earlier elicited penalty claims from Celtic after tangling with winger James Forrest inside the box but Romanian referee Ovidiu Hategan was unimpressed.

Sobrino, the January signing from Alaves, partnered Cheryshev in a 4-4-2 formation and the duo watched the Valencia defence repel a stream of attacks before later really making their mark. 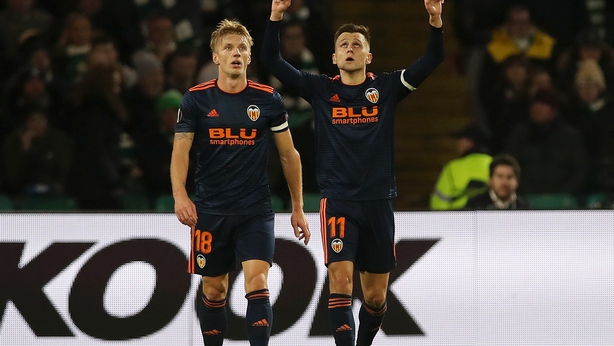 However, in the 18th minute, following a cross from the right from midfielder Carlos Soler, Sobrino flicked on and Daniel Wass' header had goalkeeper Scott Bain stretching to claw the ball past the post, with the home side defending consecutive corners.

Skipper Scott Brown's short pass back to Bain seconds later almost had his side in trouble again and the Spaniards grew further in confidence as the first half unfolded.

Nonetheless, Parkhead was stunned in the 42nd minute when Valencia scored on the counter-attack.
When McGregor lost possession in the middle of the park, skipper Daniel Parejo sent Sobrino racing clear and he simply laid it off to Cheryshev to tap into an empty net from close range.

Former Arsenal midfielder Francis Coquelin replaced Parejo for the second half and four minutes later the Hoops were two behind.

Cheryshev raced down the left and crossed for Sobrino to volley past Bain from six yards, adding to the despair of the home fans who had claimed the Russian was offside.

Just before the hour mark Rodgers went for broke, bringing on strikers Timothy Weah and Odsonne Edouard for Scott Sinclair and Christie respectively.

The Hoops fans tried to drive their team on but Valencia held firm under occasional periods of pressure and their hard work and organisation allowed the match to fizzle out, with Celtic requiring quite a turnaround in the return match if they are to reach the last-16 this season.