Tottenham put one foot in the Champions League quarter-finals after a thrilling second-half performance saw them beat Borussia Dortmund comfortably in the last-16 first leg at Wembley.

Spurs were second best in the first half, but put that right after the break as goals from Son Heung-min, Jan Vertonghen and Fernando Llorente swung the tie firmly in their favour.

It will take some capitulation in Dortmund on 5 March for them not to make it through to the last eight, on a night where Harry Kane and Dele Alli should be back in the fold.

Son continued his leading role in the influential duo's absence as he scored his 11th goal in his last 12 games early in the second half and his love affair with playing Dortmund continued as that was the ninth time he has scored against them in 11 games.

Vertonghen, who was playing at left wing-back, capped a man-of-the-match performance with a second goal in the 83rd minute and then three minutes later Llorente gave Spurs vital breathing space by nodding home from a corner with his first touch of the game.

It was the club's first win in a home knockout tie in the Champions League and by keeping a clean sheet it means the Bundesliga leaders have to score at least four goals in the second leg to have any chance of progressing.

It did not start off so well for Spurs as after Lucas Moura came within inches of putting them ahead with an instinctive volley which whistled past the far post, Dortmund began to take control.

BVB, with the help of some shoddy defending, began to pick holes in their hosts' defence and forced Hugo Lloris into two saves.

First Juan Foyth was criminally caught in possession by Chelsea-bound Christian Pulisic, whose low shot from an acute angle was kept out by Lloris' leg, and then the Frenchman's handling was tested by Axel Witsel's effort.

Lloris made another stop to deny Thomas Delaney after more lax defending, this time by Davinson Sanchez, before the Frenchman saved his best for the final few seconds of the first half to ensure it stayed goalless.

Dortmund worked a two-on-one at a corner and Jadon Sancho crossed invitingly for Dan-Axel Zagadou, but he could not connect with his header properly and Lloris was able to claw it away with millimetres to spare. 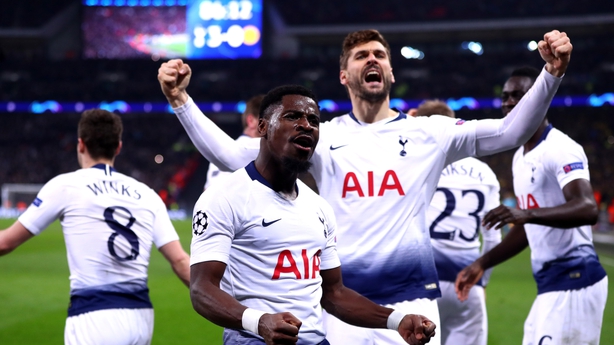 And that save proved crucial as Spurs went ahead just 67 seconds into the second half.

Vertonghen won possession back high up the pitch and, after being given the ball back, sent in a pinpoint cross that evaded Zagadou for Son to cushion home a first-time volley.

He could have been celebrating a second not long after had Christian Eriksen not been uncharacteristically careless when racing clear down the left.

Eriksen is the king of assists for Spurs, but for some reason chose to lift a cross in when rolling the ball across the face of goal would have left Son with a tap-in.

This was a different Spurs side compared to the first half as Dortmund struggled to create anything by way of danger.

And two goals in the final 10 minutes put Spurs on the brink of the last eight.

Vertonghen got a goal his industrious performance on the left deserved as after more high pressing won the ball back, Serge Aurier floated in a delicious cross that the Belgian rammed home at the far post.

Wembley was still rocking three minutes later when Llorente made it 3-0 as he nodded home a corner with his first touch of the game.

Spurs closed out the game, knowing they can travel to Dortmund in three weeks with the job virtually done.