The defender challenged Martin Dubravka for Adama Traore's looping cross to nod in from a yard out.

It denied the Magpies a precious victory in their fight against relegation and they are just a point above the Premier League drop zone.

It was the second time Newcastle had conceded an injury time goal to Wolves after Matt Doherty's winner in December.

Benitez said: "In England they don't understand the rules. I can say many things but it will not change anything.

"I didn't like the challenge at the end. You have to protect the keeper. We have been here for years and it's still very difficult to explain that.

"Maybe it's a foul before on (Miguel) Almiron too, you can say many things but it won't change what happened, like in the first game.

"It is a bad way to concede. We had one more point but it is a pity because we could have had three.

"You can analyse it but I'm really disappointed to concede this way against a good team."

Hayden opened the scoring after 56 minutes when Rui Patricio parried his angled effort in at the near post.

But, despite conceding late, Newcastle have won seven points from their last four games and also gave a second-half debut after his £20million move from Atlanta last month. 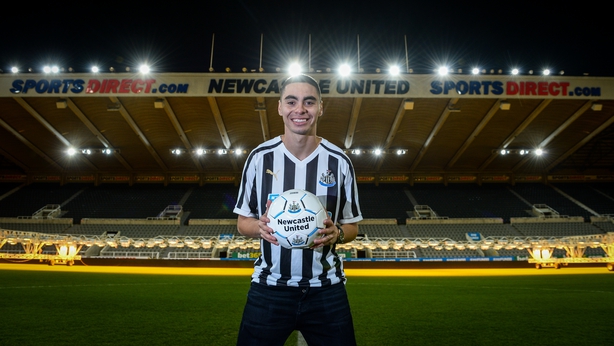 Benitez added: "I'm happy with the performance of the team, we were controlling but it's not easy. I'm happy with a lot of things but disappointed with how we conceded.

"The disappointment is for everyone."

Wolves, who spent last week training in Marbella, were hunting a fourth straight top flight win for the first time since 1972.

Raul Jimenez and Diogo Jota were thwarted by Dubravka and Wolves sit seventh, two points ahead of Watford.

They have now scored six injury time goals in all competitions this season and boss Nuno Espirito Santo was pleased with their character.

"Until the referee whistles we keep going. We're really pleased because it's something we must keep on doing," he said.

"It came and it brought some justice. We have had a lot of moments like this, sometimes it give you the win, sometimes it doesn't.

"It's not about the point, the story of the game could have been different as the first half was totally controlled.

"What I'm disappointed with is to concede, we must be compact and we allowed Newcastle too much time to decide the final pass."