Dundalk lifted the President’s Cup for the first time since 2015 as they deservedly defeated Cork City 2-1 at Turner’s Cross on Saturday evening.

First-half finishes from Dane Massey and Patrick Hoban proved to be the difference as Dundalk open their season on a high at the expense of City, who pulled a goal back through a Kevin O’Connor free kick.

This was the fourth time in succession that the two clubs have participated in the season’s traditional curtain-raiser with three of the last four now taking place at the home of Cork City.

Dundalk win the President's Cup as they edge past Cork City 2-1 at Turner's Cross #RTEsoccer pic.twitter.com/MztQ4o8I5h

John Caulfield’s side was looking for a fourth consecutive President’s Cup victory and the manager handed competitive debuts to Dáire O’Connor, James Tilley and Dan Casey in an attempt to achieve the feat.

Vinny Perth took charge of his first competitive match since he replaced Stephen Kenny at the helm and in a bid to maintain the club’s high standards, he named the same starting eleven that defeated Cork in the FAI Cup final back in November.

It had the desired effect as the Double winners dominated from the first whistle and they went close to taking the lead after just eight minutes.

Michael Duffy raced onto Patrick Hoban’s ball over the top but as he broke into the box the winger could only drill his effort straight at goalkeeper Mark McNulty.

City’s defence looked nervous and they were almost punished in the tenth minute as they needlessly conceded a corner but they were relieved to see Hoban’s header from Duffy’s delivery crash against the inside of the far left post.

As the half progressed, Duffy twice went close with strikes from distance but the Louth club wouldn’t have to wait too much longer as they deservedly took the lead with 36 minutes on the clock. 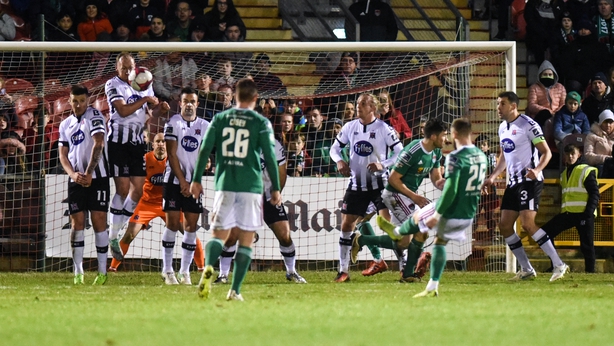 Duffy was again involved as his corner picked out Dane Massey and the defender powered his header past the defenders on the line and into the net.

The Leesiders tried to up the tempo following the concession of that goal and debutant James Tilley had their first meaningful sight at the target but he curled his free harmlessly over the bar.

That moment proved to be decisive as in first-half injury time, Dundalk doubled their advantage through the clinical Patrick Hoban.

Last year’s Premier Division top goalscorer made a clever run to get on the end of Duffy’s cross from the left and he expertly directed it past the keeper from close range.

The home side started the second period on the front foot as they looked to give the majority of the 2,777 crowd in attendance something to shout about.

Caulfield introduced the returning Kevin O’Connor from the bench just past the hour mark and it took the on-loan Preston North End defender just three minutes to make an impact.

Dáire O’Connor’s quick feet won a free kick in a dangerous position on the edge of the area and the 23-year-old took responsibility and expertly curled the ball into the top left corner to give his club hope.

City pressed forward in search of an equaliser wasn’t to be as their night as their three year association with the Cup ends and the silverware heads to Oriel Park for the second time.