Alex Iwobi and Alexandre Lacazette scored first-half goals as Arsenal got their top-four hopes back on track with a 2-1 win at Huddersfield.

Iwobi opened the scoring with a deflected volley in the first period and Lacazette stroked home his 12th goal of the season shortly before half-time.

Sead Kolasinac's own goal in stoppage time raised a huge cheer from the Huddersfield faithful, but it was too little too late.

The Gunners secured their first Premier League away win since November and kept their first clean sheet on the road this season as they moved level on points with fifth-placed Chelsea.

Huddersfield have lost their last seven home league games and 12 of their last 13 in total to stay rooted to the bottom of the table, but there is little sense of despair at the John Smith's Stadium.

And owner/chairman Dean Hoyle, back at the ground on matchday for the first time since recovering from pancreatitis, will have taken heart from another committed display from his side.

Kongolo's last-ditch tackle thwarted Iwobi in the opening exchanges and the Arsenal forward fired into the side-netting soon after.

But it did not take long for Arsenal to take the lead with their next meaningful attack.

Kolasinac picked out Iwobi in the penalty area with a deep cross from the left and the latter's first-time volley deflected off Terence Kongolo, wrong-footed goalkeeper Ben Hamer and gave the visitors a 16th-minute lead.

Huddersfield began the game with one of the lowest points totals after 25 matches in Premier League history, but they remained typically spirited and for periods in the first half had Arsenal on the back foot.

Huddersfield's struggles on the edge of their opponent's penalty area continued though, and they were denied a penalty appeal when Jason Puncheon's shot appeared to hit Laurent Koscielny's arm, only for referee Jon Moss to wave play on. 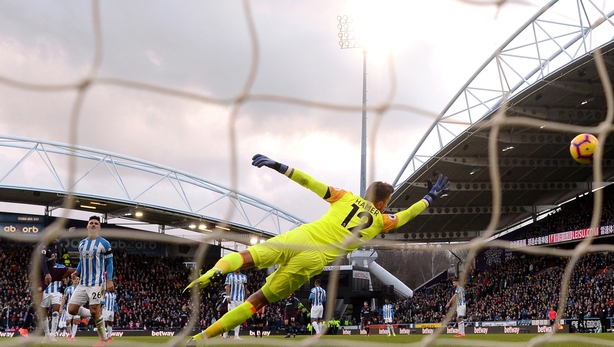 Henrikh Mkhitaryan, making his first appearance since mid-December after recovering from a broken bone in his foot, spurned a chance when shooting straight at Hamer following Ainsley Maitland-Niles' cut back.

But Arsenal struck their second just before half-time thanks to another Maitland-Niles assist as his low cross to the far post was tapped home by Lacazette.

Huddersfield produced their best moment at the start of the second half when Aaron Mooy and Kongolo combined to set up Adama Diakhaby, whose well-struck low effort was saved by Arsenal goalkeeper Bernd Leno.

Arsenal threatened to add to their lead when substitute Mohamed Elneny headed wide, but Huddersfield responded through replacement Erik Durm's cross, which was deflected on to the bar.

Owobi dragged a shot wide and was then denied by Hamer after being played in by Mkhitaryan, but the home side still caused problems and Nacho Monreal cleared after Diakhaby's shot had been partially saved.

Town persisted and substitute Laurent Depoitre went close after a barging run before they scored their first league goal in five matches.

Diakhaby ran on to Mooy's throughball and his shot rebounded off Kolasinac before crossing the goalline in the fourth minute of time added on.