Aguero, who opened the scoring after just 46 seconds, netted all three from close range as City bounced back from their midweek defeat to Newcastle with a convincing display at the Etihad Stadium.

Arsenal did pose some awkward questions after finding a quick equaliser through Laurent Koscielny, but two more from Aguero either side of the break put the result beyond doubt.

There was an element of controversy over Aguero's third after the ball struck his arm as he bundled it in, but it was not deemed deliberate.

City eased through the final stages to put the onus on Liverpool to respond at West Ham on Monday.

The Newcastle loss clearly stung City and they got off to a blistering start as Aguero, who struck after 24 seconds at St James' Park, again scored in the first minute.

The opportunity came after Aymeric Laporte, who started at left-back while Fernandinho dropped into central defence, robbed Alex Iwobi on the egde of the area. 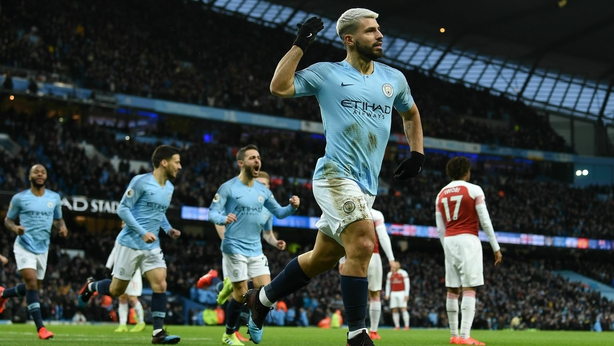 Laporte pushed forward and clipped in an inviting cross for Aguero, who got between two defenders to meet the ball with a powerful diving header.

Arsenal were fortunate to escape further damage in what proved a shoddy opening 10 minutes.

Shkodran Mustafi appeared to trip Aguero in the area as the Argentinian raced on to a fine ball from Kevin De Bruyne, but referee Martin Atkinson gave nothing. The officials also correctly disallowed a Laporte header for offside and Raheem Sterling brought a good save from Bernd Leno.

The Gunners may have feared a long afternoon, but they stunned City by hitting back on 11 minutes after winning a corner form their first attack. Lucas Torreira whipped in a low cross, Nacho Monreal flicked on and Koscielny headed home from close range.

The game could not continue at that frantic pace and settled to a more modest tempo, but with City continuing to dominate possession. Nicolas Otamendi tested Leno at the end of one good move, but Arsenal also posed a threat, with Sead Kolasinac lashing an effort wide and shooting at Ederson. Torreira also had a fierce strike blocked.

City regained the lead just before the break as their passes once again started to cut through. Ilkay Gundogan floated a delicate ball into the box for Sterling and his low volleyed cross left Aguero with a simple tap-in.

De Bruyne then shot across goal as City looked to kill off the game and the Belgian was also denied by Leno early in the second half.

The decisive blow came as Aguero completed his hat-trick just after the hour, although it was hardly the purest of strikes from the Argentinian.

Once again, however, the striker was simply in the right place when it mattered as Sterling delivered a fine low ball from the left. Leno did get a touch, deflecting the ball onto the arm of the sliding Aguero, but, such was his momentum, it carried over the line.

Arsenal complained he handled, but the goal was given.

Thereafter it became a case of damage limitation for Arsenal and Leno made good saves from Aguero and David Silva.