Rangers were awarded four penalties in their 4-0 victory over St Mirren as they kept up the pressure on Ladbrokes Premiership leaders Celtic.

The Light Blues remain second but moved to within three points of the top ahead of Celtic's clash at St Johnstone on Sunday.

James Tavernier opened the scoring from the spot after just three minutes following a foul from Ethan Erhahon in the box.

Tavernier then hit the post with his second spot-kick of the afternoon after Jermain Defoe went down under the challenge of Paul McGinn in the 25th minute.

Ryan Kent struck the bar after 35 minutes but the hosts, and Tavernier, eventually added to their lead with another penalty early on in the second half.

Referee Andrew Dallas adjudged Greg Tansey to have handled the ball in the area after 55 minutes and Tavernier stepped up to atone for his earlier miss.

Daniel Candeias won Rangers' fourth spot-kick in the 80th minute and Defoe this time converted from 12 yards before Kent added gloss to the scoreline moments later. 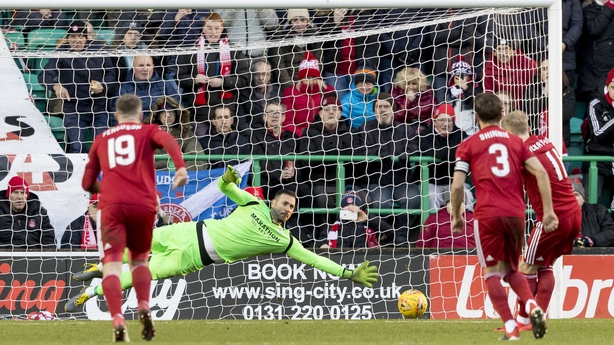 Aberdeen moved up to third after winning 2-1 at Hibernian, who lost their first game since Neil Lennon's departure as head coach in midweek.

Hibs, with caretaker boss Eddie May in charge, started brightly and took the lead after just nine minutes when Oliver Shaw struck from 25 yards.

The Dons, though, hit back to take the lead with two goals inside 10 first-half minutes, through Andrew Considine and Gary Mackay-Steven.

Mackay-Steven saw a 50th-minute penalty saved by Ofir Marciano but Aberdeen held on for the three points.

Brian Rice's first game as manager of Hamilton ended in a dramatic 1-1 draw at home to Dundee.

However, Darian MacKinnon struck in added time for Hamilton to keep them in 10th, a place and a point above the Dee.

Hastie got the hosts off and running in the sixth minute before Curtis Main added a second after 12 minutes.
Stephen Robinson's side then put the game beyond doubt midway through the first half when Hastie doubled his tally for the afternoon.