Joshua King scored a brace as Bournemouth thrashed Chelsea at the Vitality Stadium to knock the Blues out of the Premier League's top four.

A well-deserved and memorable 4-0 win was secured with all four goals coming in a rampant second-half display for the Cherries, with Blues boss Maurizio Sarri receiving flak from the travelling support.

King struck either side of setting up David Brooks before Charlie Daniels headed in a last-gasp fourth which saw Chelsea drop to fifth, below London rivals Arsenal on goal difference.

The defeat was Chelsea's third in a row on the road in all competitions and Sarri's decision to haul off Premier League debutant Gonzalo Higuain after Brooks' strike was met with disdain from the visiting fans.

Blues supporters will also be demanding an explanation as to why Callum Hudson-Odoi was omitted from their matchday squad altogether.

The 18-year-old travelled to the south coast but was left out of the squad a week after handing in a transfer request amid ongoing interest from Bundesliga giants Bayern Munich.

Hudson-Odoi was cheered as he starred, and scored, in Chelsea's 3-0 FA Cup win over Sheffield Wednesday on Sunday, with Sarri insisting he will not be sold before Thursday's transfer deadline.

Bournemouth were quick out of the blocks but it was the visitors who forced the first decent attempt of the evening as Mateo Kovacic came close to his first goal for the Blues - only for Artur Boruc to tip his header onto the crossbar.

Pedro delivered the cross for Kovacic's header and stung the palms of Boruc as he fired straight at the Bournemouth goalkeeper with 25 minutes on the clock.

Bournemouth's first chance came just after the half-hour mark as King's pace saw him beat Antonio Rudiger on the counter-attack, only for Brooks to fluff his lines when the ball was worked to the Wales international inside the box.

Brooks then headed tamely at Kepa Arrizabalaga with Chelsea still struggling for creativity at the other end.
Another rapid break before half-time saw Junior Stanislas break through onto Kepa's goal but the forward could only shoot straight at the Spaniard.

That meant the sides went in level at the interval but it took just two minutes after the restart for Bournemouth to hit the front.

Ryan Fraser got in down the left and played in Brooks, who squared for King to power an effort past Kepa for his seventh goal of the campaign. 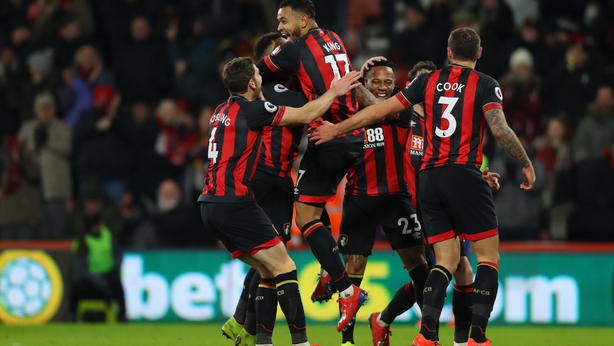 Pedro again could only find Boruc's gloves as Chelsea chased an equaliser, with N'Golo Kante passing up a fine opportunity to level as he stayed onside but could not control a Pedro cross and saw the ball collected by the Polish goalkeeper.

Bournemouth seemed more than happy to soak up pressure and hit Chelsea on the break - and it was through that method that Eddie Howe's men doubled their lead.

David Luiz cheaply lost possession by passing straight to Brooks before a weak challenge on King allowed the Norway forward to return the favour from earlier in the half, slotting a pass to Brooks who coolly converted.

Sarri, who had already replaced Pedro with Willian, incurred the wrath of a number of Chelsea's travelling supporters when he opted to replace Higuain - who had been largely ineffectual - with Olivier Giroud in response to the second Bournemouth goal.

Brooks had been superb for the hosts but limped off with a quarter of the game remaining to be replaced by Jordon Ibe - but it did not stop Bournemouth adding to their lead.

Liverpool loanee Nathaniel Clyne's perfectly-weighted through ball set Stanislas away and he squared for King to tuck home and kill off any lingering threat of an unlikely Chelsea comeback.

Boruc saved well from Cesar Azpilicueta's header but it was Bournemouth who were celebrating again as Daniels headed in from a short-corner routine on the stroke of full-time.