Chelsea have declined to comment on reports 18-year-old winger Callum Hudson-Odoi has handed in a transfer request.

Hudson-Odoi has been linked with a big-money move to Bayern Munich, who have made no secret of their admiration for the England youth international.

Now, with the winter transfer window closing on Thursday, Hudson-Odoi has reportedly declared his desire to move, with Chelsea refusing to comment.

He has 18 months remaining on his contract and Chelsea could now opt to cash in or keep Hudson-Odoi until the end of the season in an effort to persuade him to change his mind and sign a new deal.

Chelsea have repeatedly stated their wish to keep Hudson-Odoi, an Under-17 World Cup winner with England in 2017.

He made his debut in January 2018 in an FA Cup win over Newcastle and has made a total of 14 appearances for the Blues, scoring one goal.

He impressed in pre-season under Maurizio Sarri and was retained in the first-team squad while many of his contemporaries went out on loan.

The Blues academy graduate, who first played for Chelsea in the under-eight age group, has made 10 appearances this season.

Five of those have been starts, while his first of three Premier League appearances came on St Stephen's Day at Watford. 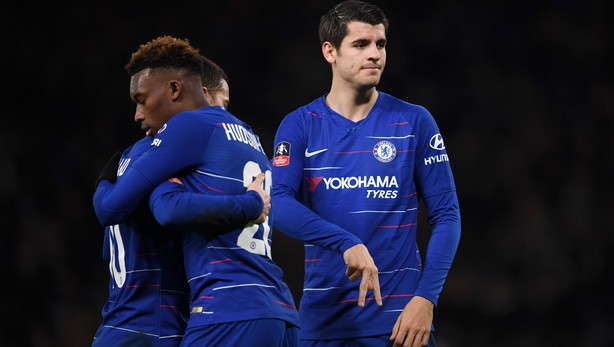 He played for 10 minutes in last Saturday's Premier League loss at Arsenal and was an unused substitute in the midweek clash with Tottenham as Chelsea advanced to the Carabao Cup final.

Hudson-Odoi might have been expected to start in Sunday's FA Cup fourth-round tie with Sheffield Wednesday, but Saturday night's revelation could change that.

There were also reports Alvaro Morata's departure is close and that the striker is in Spain ahead of a loan move to Atletico Madrid.

The striker, signed for €69.5m from Real Madrid in July 2017, has endured an unhappy time at Stamford Bridge and Sarri said Morata told him of his wish to leave last month.

The arrival of Gonzalo Higuain has helped to grant Morata's wish.