Manchester United boss Ole Gunnar Solskjaer is excited about what could be to come from Alexis Sanchez following his goalscoring return to Arsenal.

Sanchez was making his comeback from a hamstring injury and bagged an impressive goal on his Emirates Stadium return to set United on the way to a 3-1 FA Cup fourth-round win.

The Chilean swapped the Gunners for United 12 months ago and has found life tough at Old Trafford, but reminded Arsenal fans of what they were missing as he coolly finished from an acute angle after rounding Petr Cech.

Further goals from Jesse Lingard and Anthony Martial, either side of a Pierre-Emerick Aubameyang effort for Arsenal, sent United through to the fifth round and made it eight wins from eight under the Norwegian's interim spell.

Solskjaer knows that Sanchez has more to give and hopes his goal can help him kick on.

"It wasn't like Alexis had an open goal, it was a great finish," he said of the 31st-minute opener.

"Every player, the more confident you get the more you want to get on the pitch and train and work on yourself and you trust yourself.

"He has been injured lately so it was great to see him get 65-70 minutes tonight and he can only improve and I think he knows that himself."

It was a dominant display by United, far more controlled than that of their 1-0 win in the other half of north London at Tottenham a fortnight ago. 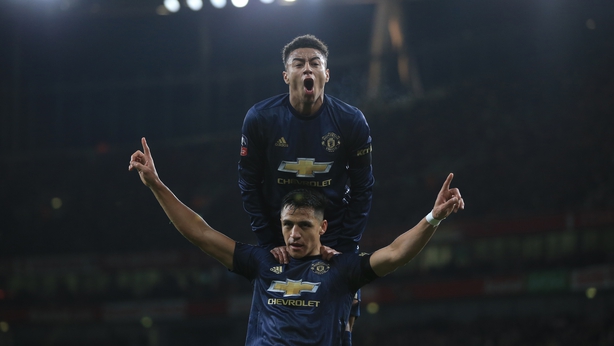 Solskjaer was pleased with how his side stepped up their performance and reckons it was the one of the best of his eight-game winning stint.

"It was a massive step forward for us performance wise, as a team, the structure in the team was miles, miles, miles better compared to Tottenham a couple of weeks ago where we hung in there and David (De Gea) saved us," he added.

"Today, Sergio (Romero) had a fantastic save at the start of the first half, but our structure was miles, miles, miles better.

"We have been working on that, we need to dig in and defend properly against good teams.

"It is a league game, a massive league game for us at home again. Tomorrow we will enjoy sitting back in the chair and enjoy watching the FA Cup."