Celtic new boy Vakoun Issouf Bayo revealed fellow countryman Didier Drogba to be his inspiration as he looks to make his mark at Parkhead.

Retired striker Drogba won 105 caps for Ivory Coast during a glittering club career, particularly at Chelsea where he won the Champions League as well as several other major honours.

Brendan Rodgers' latest recruit, who wants to be known only as Bayo, signed from Dunajska Streda on a four-year deal for a reported fee of £2million and was introduced on Wednesday night at half-time of the 4-0 Ladbrokes Premiership win over St Mirren.

Speaking at Celtic Park through an interpreter, the 22-year-old Ivory Coast international acknowledged the influence of his country's football superstar.

He said: "Didier Drogba is a bit like a big brother to me but we haven't spoken to each other.

"I do hope I can have a career as good as he had but we will see what happens. 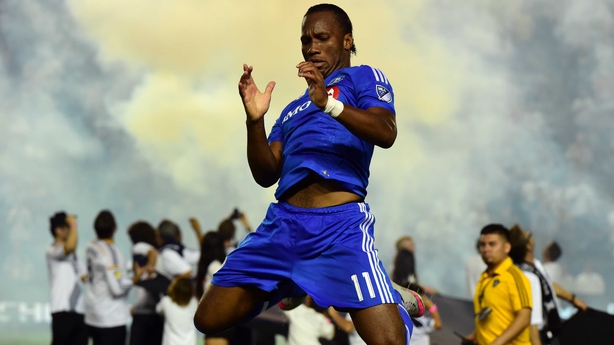 "So yes, in a way I am inspired and playing in the same style as a young Didier Drogba."

Bayo has been delighted with the welcome he has had from Celtic fans since he arrived in Glasgow.

"I have found it very moving and it made me really happy," he said.

"The fans played a big role in me deciding to sign for Celtic.

"In Slovakia, I am quite well known for enjoying celebrating with the fans when I score and knowing what I know of the Celtic fans, I am really looking forward to having the celebration with them."

Bayo scored 18 goals in 23 games for the Slovak Super League outfit before he made his move and is looking to continue that form in Scotland.

He said: "When I first heard of the offer from Celtic I was really surprised and then obviously very happy.

"I thought this was a good opportunity so I am going to take it, so here I am.

"I would like to keep my scoring record, keep scoring goals, make the club and the supporters happy and win trophies."

However, Bayo has not played for over a month and will now concentrate on getting up to speed with the Europa League last-32 clash with Spanish side Valencia next month a goal.

He said: "It would be fantastic to play in the Europa League. It is something I have been thinking about for a long time.

"But at the moment I need to work on my fitness because I haven't played for a while so it is all about hard work and being match ready and then the coach will decide if I play."