With the Old Trafford giants highly unlikely to make a first-team signing this month, focus has turned to tying down players to new and improved deals.

Scott McTominay this week inked a contract until at least 2023 and negotiations continue to keep star players De Gea and Martial beyond next summer.

Mata, Ander Herrera and Ashley Young are out of contract at the end of the season, with Solskjaer expecting positive news soon.

"I think the club's making progress, but I leave that to the right people to do that," the United manager said.

"I don't know really how far we are away from it but hopefully we're going to have some good news in the coming weeks."

For now, the focus is on Friday's trip to Arsenal in the FA Cup fourth round as Solskjaer looks to extend his club-record start to life at the helm to an eighth successive match in all competitions.

Chris Smalling has returned to training after a foot injury but is set to miss out along with Marcos Rojo and Marouane Fellaini, but Alexis Sanchez is in line to feature at his former club for the first time since leaving the Gunners last January.

The 30-year-old has endured a difficult first year at Old Trafford and has not played since a hamstring issue issue flared up against Reading in the third round.

"He'll be involved," Solskjaer told MUTV. "I think he'll love it if the crowd turn against him. As a player, pride kicks in and you think 'I'll show all of you'.

"He's been fantastic in training, his attitude has been spot on so hopefully he'll enjoy the game."

Friday's match is the most eye-catching fixture of the fourth round and a chance for Solskjaer to get the one over Arsenal again.

Alex Ferguson's United and the Gunners enjoyed an intense rivalry during the striker's time at the club, with the FA Cup semi-final win on the way to the 1999 treble particularly memorable.

"The semi-final in 99 is such an important game," Solskjaer said of the match remembered for Ryan Giggs' stunning solo goal.

"When Peter (Schmeichel) saves that pen from Denis Bergkamp, that gives us the advantage and we win the treble.

"If Bergkamp had have scored, they'd have won the double. That's just how small the margins are, and I think that's the standout for me.

"I was substituted so I watched Giggsy's goal from the sidelines and what a goal that was.

"I think that was the one highlight in the FA Cup, apart from walking out on the pitch at Wembley in 99.

"That was a proud moment for me because growing up in Norway that's the game you look forward to and always broadcast live on telly.

"I still remember Norman Whiteside's left-footed curler after Kevin Moran was sent off, so that was the one game that we knew we were going to watch." 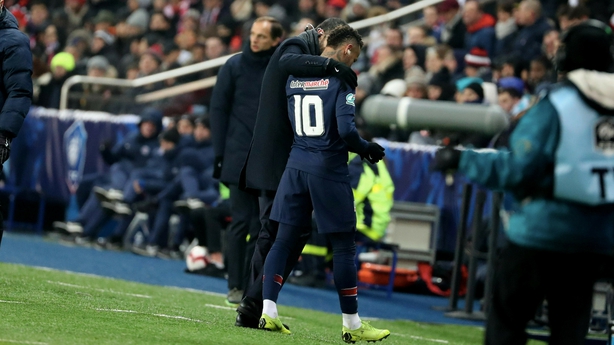 The striker left the field injured in the Coupe de France clash with Strasbourg on Wednesday night.

The Brazil star rolled his right ankle in the second half and was reportedly in tears as he left the field and headed back to the dressing room.

PSG face United in the Champions League knockout stages on February 12, with Neymar having missed last season's clash with Real Madrid at the same stage due to a sprained right ankle and fractured metatarsal.

He missed the rest of the season before returning to fitness in time for the World Cup.

PSG said in a statement on their official website: "Initial examinations have revealed a painful recurrence of his injury to the fifth metatarsal of his right foot.

"The treatment of this injury will depend on how it evolves over the next few days. All options can be envisaged at this time."