Fulham's Aboubakar Kamara was arrested on suspicion of actual bodily harm and criminal damage after a fight at the club's training ground.

Police were called to Motspur Park when the 23-year-old forward was involved in an incident on Monday evening, and he has since been banned from the club's training ground.

The Frenchman was earlier this month also allegedly involved in another fight with his team-mate Aleksandar Mitrovic, which took place during a team yoga session.

"Police were called to a training ground in New Malden, shortly after 17.00hrs on Monday, 21 January to reports of a fight," the Metropolitan Police said in a statement.

"Officers attended. One man, in his 20s, was arrested on suspicion of ABH and criminal damage.

"He has been taken into custody in a south London police station. Enquiries continue."

A club statement from Fulham, who sit 19th in the Premier League as they struggle against relegation, read: "The club is grateful for the swift attention and action by the Metropolitan Police immediately following our reporting of the incident on Monday.

"The subject who was arrested is banned indefinitely from Motspur Park and all club activities.

"We will refrain from further comment but will stress that we will fully cooperate with any new or continuing investigation or legal proceeding in the name of providing everyone a secure and safe working environment." 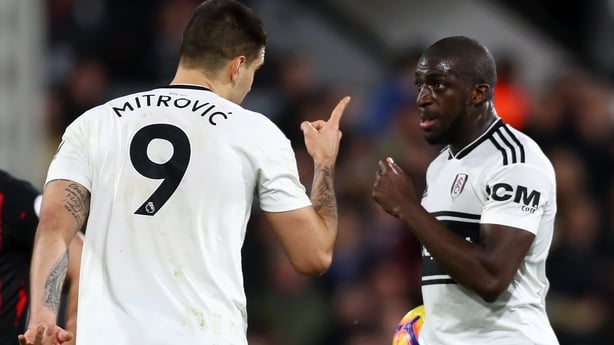 The incident is the latest controversy in which Kamara, who was signed in July 2017, has been involved.

In the December 29 victory over Huddersfield he ignored team orders and instead took responsibility from Mitrovic, who among other team-mates he argued with, for a late penalty he ultimately missed.

Mitrovic then rescued him by scoring a winning goal before Fulham's manager Claudio Ranieri said he had wanted to "kill" Kamara, who he also accused of lacking respect for his club and team-mates while revealing he would consider dropping him for their next fixture, against Arsenal.

The forward appeared as a substitute and even scored at the Emirates Stadium but has not made a further appearance in their three fixtures since then, during which allegations of the fight during yoga emerged.