Jeff Hendrick's Premier League goals tally for the 2018-19 season has been doubled as the Clarets midfielder has been credited with the his side's first goal from last week's 2-1 win over Fulham.

The Ireland international's effort was initially awarded as a Joe Bryan own goal as the well-struck shot took a major deflection en route to goal.

However, the Premier League have now awarded the goal to Hendrick following an appeal by his club as the shot was deemed to be on target.

..."Jeff Hendrick has officially been officially credited with Burnley’s first goal in the 2-1 win over Fulham at Turf Moor."

We love a bit of JUSTICE, don't we @PhilBirdBFC? #JusticeForJeff

Stephen Ward is back in contention for Burnley for this weekend's trip to Watford, as the Ireland defender featured for the under-23s earlier this week, however, Robbie Brady is ruled out through suspension. Kevin Long is also in the squad for the trip to Vicarage Road.

Iceland winger Johann Berg Gudmundsson faces a late fitness test on his thigh ahead of Burnley's trip to Watford.

Defensive duo Matt Lowton and Phil Bardsley are both carrying unspecified knocks but Clarets manager Sean Dyche is hopeful at least one will take to the field at Vicarage Road.

Midfielder Steven Defour may return, while goalkeeper Nick Pope will definitely miss out. 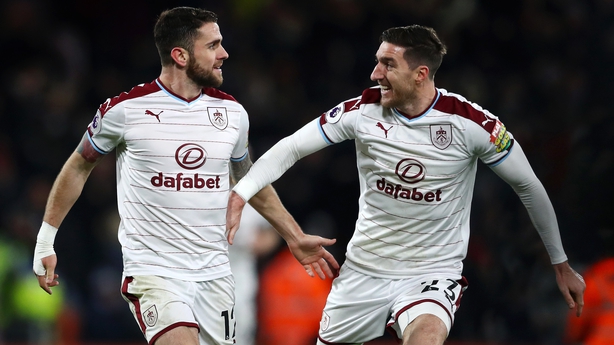 Meanwhile, Burnley manager Sean Dyche suggested his side do not find themselves in uncharted territory as they battle for Premier League survival.

A seventh-place finish last season raised expectations around Burnley, who have twice been promoted from the Championship under Dyche, but they ended this year in the relegation zone.

Three successive top-flight victories have carried them out of the bottom three and while Dyche is not taking anything for granted, he knows they are in familiar surroundings ahead of their trip to Watford this weekend.

He said: "We are fortunate in the sense - other than last season when we had a very strong season - the other seasons in the Premier League we've always been in and around it.

"We've been searching for wins and making sure we got points on the board. It's not new territory.

"I think the feel-good factor in the camp has stayed pretty strong considering we've had a really up and down time this season.

"Everyone's mentality has been really clear-minded on doing what they need to to get a result.

"There have been a lot of different demands this season, I think we've come through that somewhat.

"But there are no guarantees, I mentioned that last week so the next one doesn't owe you anything.

"We're going down to a decent Watford side, they've had ups and downs in their seasons so far themselves.

"But they're a good outfit, they have potential going forwards and they can open up a game, and they've been pretty defensively strong other than the ups and downs that a lot of teams in the Premier League have had.

"We've certainly got to be right on our performance to get something there."

Saturday's visit to Vicarage Road sees Dyche return to his former club, where he rose through the coaching ranks and spent a little more than a year as manager before being ousted in July 2012 by the Pozzo family, the club's then new owners.

There has been a high turnover of managers under the Pozzos but Dyche feels there can be no arguing with the business structure, with the Hornets established in the top-flight and sitting seventh in the standings.

Dyche said: "There's no right or wrong, the facts are the facts, it's worked. Their way of doing it for Watford has worked and that's a fact, it's not about opinion for me.

"The club's a radical shift from what it was when I was there, absolutely chalk and cheese now.

"But it's worked so I don't think there's any other debate point than the idea is to win and be successful in whatever form that success is. For them, that's Premier League football.