The tide of opinion is turning against Real Madrid coach Santiago Solari in the wake of haphazard results, timid performances and baffling team selections less than three months after he succeeded Julen Lopetegui.

The former Real Madrid and Argentina midfielder faces the stiffest test of his tenure on Saturday at third-placed Sevilla, who thrashed the European champions 3-0 in September, spelling the beginning of the end for Lopetegui.

Sevilla are locked on 33 points with Real, who are fourth in the league and 10 points off leaders Barcelona, who host Leganes on Sunday.

While Solari initially had encouraging results following Lopetegui's ill-fated reign, winning 11 out of 13 games and lifting the Club World Cup in December, his suitability for the job has been thrown into doubt following a dire start to 2019.

Madrid were held to a 2-2 draw at struggling Villarreal in their first game of the new year, then lost 2-0 at home to Real Sociedad and scraped a 2-1 win at Real Betis, snatching victory with a late free-kick after having only 26% possession.

The Argentine, who like Zinedine Zidane was promoted from coach of Real's reserve side, lacks the charisma and stardust of his former team mate, who led Madrid to a remarkable three successive Champions League wins before resigning.

He also appears to lack the coaching pedigree of Lopetegui, who oversaw some impressive displays but had horrendous luck in his short time at the club. 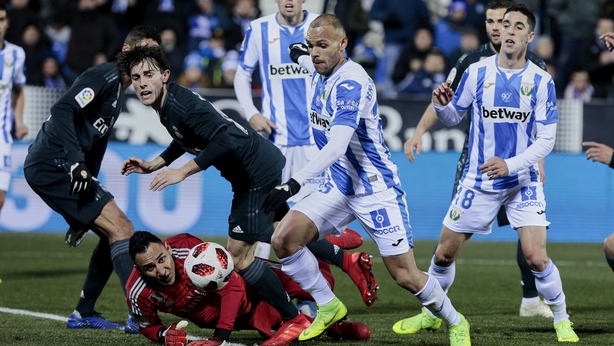 Solari's apparent disregard for midfielder Isco, one of the team's most popular players but who has failed to start a league game under Solari, has not helped his cause.

His declaration that "draws should not be underestimated" after throwing away the lead against Villarreal was also met with consternation in the Spanish media, with many commentators saying the remarks were not befitting of a Real Madrid coach.

Real may have reached the Copa del Rey quarter-finals by seeing off Leganes 3-1 on aggregate, but Wednesday's limp 1-0 second-leg defeat by their Madrid neighbours has led to further criticism of Solari.

"Unsustainable mediocrity" is how Spanish newspaper Marca described Madrid's current state, adding that many of the club's fans have written off the season completely, a theory supported by falling attendances at the Santiago Bernabeu.

The visit of Sevilla should motivate many of the fans who have stayed away in recent weeks to return for a game which could have a big say in determining whether Solari stays in charge beyond this season.