The Rams set up a fourth-round tie with League One Accrington by upsetting their Premier League opponents 5-3 on penalties at the end of an action-packed 2-2 draw at St Mary's.

Goals from Harry Wilson and Martyn Waghorn ensured the game finished level after 90 minutes after quick-fire strikes from Stuart Armstrong and Nathan Redmond put the hosts in control.

The Championship club thought they had taken a first-half lead but Craig Bryson's finish was correctly disallowed for offside following intervention by the Video Assistant Referee.

Replays showed striker Waghorn, who provided the assist for Bryson, was marginally offside in the build-up to the 38th-minute strike, with referee Anthony Taylor ruling it out after a delay of more than two minutes.

Derby's preparation for this game was dominated by the fallout from Leeds' 'spying' ahead of Friday's 2-0 defeat at Elland Road. 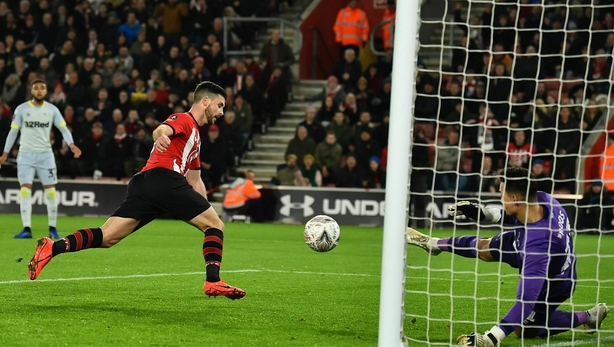 Leeds head coach Marcelo Bielsa, who admitted sending someone to watch the Rams train, held a press conference on Wednesday where he revealed he had done something similar to all opponents this season.

County boss Frank Lampard refused to comment on the matter before kick-off and made six changes to the team beaten in West Yorkshire, starting fit-again Liverpool loanee Wilson following a hip injury.

The visitors almost fell behind in the 11th minute when Southampton defender Jack Stephens headed over from a James Ward-Prowse corner.

Saints boss Ralph Hasenhuttl admitted the most positive aspect of his first cup replay as a manager was the opportunity to clear the suspensions of Yan Valery, Pierre-Emile Hojbjerg and Charlie Austin before Saturday's Premier League clash with Everton.

Johnson, playing on the left, appeared eager to make an impression and was deservedly booked for a rash challenge on Wilson in the 16th minute having escaped an earlier yellow card for diving. 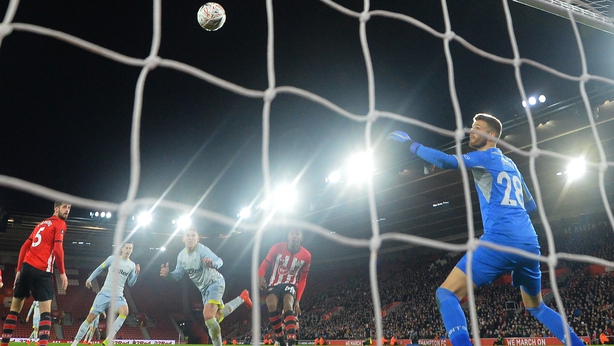 He almost made a more constructive contribution six minutes later, delivering an inviting cross which another Irishman, Shane Long, diverted straight at Rams goalkeeper Kelle Roos from close range, before Armstrong made a mess of the rebound.

Southampton were then spared a half-time deficit by VAR after Bryson expertly finished a flowing Rams move.

Scotland midfielder Armstrong broke the deadlock with 68 minutes played, nodding in a rebound from close range after Long's header from Mohamed Elyounoussi's cross was cleared off the line by Scott Malone.

Redmond, who replaced Johnson at half-time, doubled the advantage two minutes later by racing onto Stephens' pass and lifting the ball over the onrushing Roos.

Derby had come from two goals down to draw 2-2 in the initial tie on 5 January and they repeated the trick on the south coast.

Wilson started the fightback with a free-kick from wide on the right which deceived everyone and found the bottom-left corner in the 76th minute. 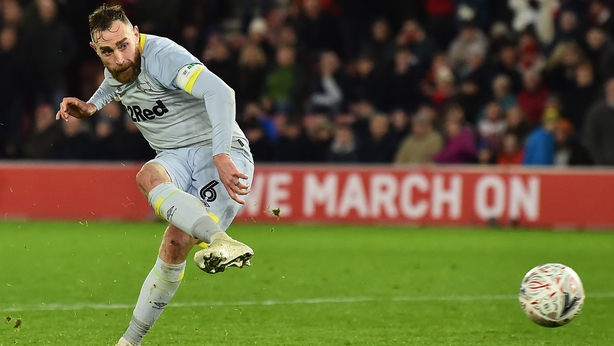 The Wales international then provided a pinpoint cross for the unmarked Waghorn to head into the top-right corner six minutes later.

County substitute Tom Lawrence had a chance to prevent extra-time when he nodded Waghorn's delivery over the crossbar in stoppage time.

Redmond wasted a golden opportunity to restore Saints' lead in the 111th minute, firing straight at Roos after being slipped in by Oriol Romeu, before his off-target spot-kick in the shoot-out gave Keogh the chance to win it; a chance he took with both hands.