The Blues had plenty of chances, but only prevailed when Willian curled in a decisive second, following another assist by Eden Hazard, who was again deployed as Chelsea's 'false nine'.

Goalscoring remains an issue for Chelsea, who faced the prospect of a third top-flight home game without scoring for the first time since November 1993, but finished the day with a six-point advantage over fifth-placed Arsenal.

Newcastle appeared to be the ideal opponents to end the lean streak, having won one of their past eight league games.

Newcastle, watched by owner Mike Ashley for the first time since mid-November, were in the relegation zone by the 5.30pm kick-off.

The line-ups illustrated the disparity in resources, but Maurizio Sarri's decision to stick with Hazard as his attacking focal point could have been interpreted as a message in his search for a new striker.

Alvaro Morata was absent for a second successive game amid suggestions of a departure before the end of the January transfer window, while Olivier Giroud was on the bench alongside Callum Hudson-Odoi. The 18-year-old winger has been linked with a big money move to Bayern Munich.

The strikerless Blues led when David Luiz's 50-yard pass found Pedro, whose run eluded Clark. The Spaniard lifted the ball over Martin Dubravka, with the goalkeeper in no man's land. 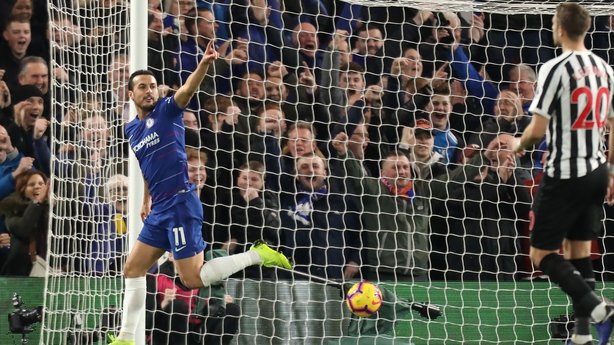 Newcastle levelled after 40 minutes. Matt Ritchie's corner was met by Clark, who leaped above Luiz to direct a powerful header into the bottom corner.

Chelsea came close to restoring their advantage from the restart, but Willian passed wide following Jorginho's lofted through ball. He should have scored.

Pedro spurned two straightforward chances early in the second half, before Hazard, who had been a peripheral figure, created Chelsea's second.

The Belgian sucked in four defenders before feeding Willian, who checked inside from the left side of the area and curled the ball inside the far post.

It was Willian's first Premier League goal since October and his third of the season, equalling defender Clark's tally.

Only two players have scored 10 or more goals and provided 10 or more assists in Europe's top five leagues: Barcelona's Lionel Messi and Hazard.

Hazard was crunched by challenges from Christian Atsu and Isaac Hayden before Chelsea went close again.

Hudson-Odoi was introduced for Pedro with 10 minutes remaining and soon after a chorus of "we want you to stay" was heard.