As the saga over Declan Rice's international future enters its end stages, Ireland boss Mick McCarthy has revealed he has spoken with his English counterpart Gareth Southgate about the West Ham player.

Rice has three caps from friendly games for the Boys in Green but opted out of recent squads for Nations League games that would have ruled out the 19-year-old representing his native country.

Having recently signed an improved deal with the Irons, the versatile Rice has indicated that he will make up his mind about his international career soon.

Speaking at the Soccer Writers of Ireland awards last night, McCarthy said: "I spoke to Gareth and he saw him as a centre-back. 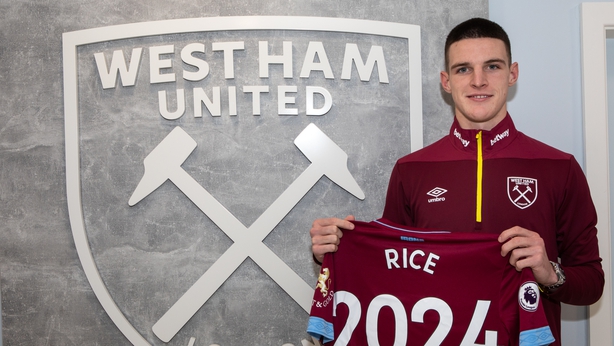 "I thought because he's not playing there at the moment, he wouldn't be in there [England squad] in front of the ones already in there, plus he's not been in their youth system and come through like he was with ours and Gareth Southgate was running theirs for a long time.

"I want him playing in the position he is now at West Ham, for now, and see where he develops.

"I think he saw himself initially as a centre-half but then he is enjoying midfield. I said to him, 'I'm looking to build a team around him from March onwards'. Are England?

"I'd like a decision at some stage. December's gone, we're into January, it will come around pretty quick.

"But there's no worries with him. It's not like we have to change him over from one to the other. I thought [the chat] was positive.

"He was more concerned at the time with getting his contract sorted out. That was a big issue."

Ireland play their opening Euro 2020 qualifier away to Gibraltar on 23 March.

Rice scored the only goal of the game as West Ham beat Arsenal 1-0 on Saturday afternoon.