Kane scored from the spot in the 26th minute after being scythed down by Kepa Arrizabalaga, with the video assistant referee ruling the England striker had stayed onside in the build-up.

Kane had no problems converting from 12 yards to move ahead of Cliff Jones on the club's all-time list of scorers. He is fourth on the list with 160 goals after netting for the sixth successive game.

It gave Spurs a win they perhaps did not deserve as Chelsea twice hit the woodwork, but there will be no complaints from the hosts as they registered a third successive victory over their London rivals for the first time since 1963.

Maurizio Sarri, though, will be confident his side will be able to turn the deficit around in the second leg at Stamford Bridge in a fortnight, having performed far better than in their 3-1 defeat at the national stadium six weeks ago.

3 - Tottenham have won three successive games against Chelsea for the first time since a run of five between March 1961 and September 1963. Bragging.

Chelsea's defence were run ragged by Son Heung-min in that league fixture in November and they were given a reminder of the threat posed by the South Korean in the early exchanges.

First he burst through and ended up on the floor after a tangle with Andreas Christensen before another foray carved out the first chance.

He caused panic down the right and the ball ended up with Kieran Trippier, whose cross was met by Kane's ambitious overhead kick that went straight at Arrizabalaga.

The keeper's next involvement led to Tottenham taking the lead in the 26th minute, after a lengthy intervention by VAR.

Kane was set clear by Toby Alderweireld's long ball over the top and play was allowed to continue, despite the assistant intimating he thought the England striker was offside. 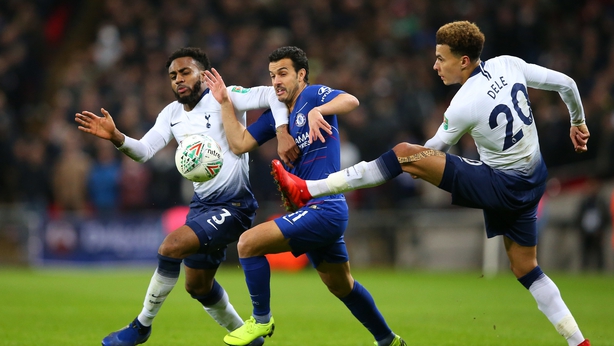 Kane got to the ball first and was clattered into by Arrizabalaga. Referee Michael Oliver consulted VAR, who ruled that Kane was just onside and that he had been fouled.

It was the perfect use of the technology and a nerveless spot-kick followed from Kane, who drilled into the bottom corner for his 160th goal for the club.

Chelsea were not happy about the decision, but tried their best to get back into the game and only the woodwork stopped them equalising.

First N'Golo Kante hit a post as he turned Marcos Alonso's cross goalwards at the near post and then Callum Hudson-Odoi's deflected cross almost caught Paulo Gazzaniga out, but the Spurs goalkeeper backpedalled and tipped the ball on to the crossbar.

Sarri's men were putting up a far better show and, after Arrizabalaga saved a Kane effort from distance, Gazzaniga was called into action at the other end, first denying Eden Hazard and then Kante.

Chelsea's best chance came just before the hour and they will rue it falling to Christensen as the defender, unmarked at the back post from a corner, stabbed wide with the goal at his mercy.

Spurs, who were not helping themselves, were hanging on at times as Hazard desperately tried to produce a moment of brilliance, but there was always a body in the way.

It was a frantic ending, but Spurs held on to take a narrow lead to Stamford Bridge on 24 January.