Ruben Neves fired Wolves into the fourth round as they dumped Liverpool out of the FA Cup.

The midfielder struck to clinch a 2-1 win at Molineux just after Divock Origi cancelled out Raul Jimenez's first-half opener.

It was Liverpool's second straight defeat after their 2-1 loss at Premier League title rivals Manchester City.
Reds boss Jurgen Klopp made nine changes and gave debuts to three teenagers and saw his shadow side produce a flat display.

But they were denied a replay by John Ruddy's superb save when he turned Xherdan Shaqiri's free-kick onto the post, although Wolves were good value for their win against the lacklustre visitors.

The Reds gave debuts to teenagers Curtis Jones and Rafael Camacho from the start while 16-year-old Ki-Jana Hoever made his bow after just five minutes.

Dejan Lovren added to Klopp's defensive worries when he was forced off injured leaving the visitors without a recognised centre-back as right-back Hoever, Liverpool's third-youngest player ever, partnered Fabinho.

Hoever remained untroubled with James Milner - who made his Premier League debut the year the defender was born - initially providing a shield from midfield.

Liverpool, with Mohamed Salah on the bench, were subdued and Shaqiri's wild effort which flew wide after 31 minutes was their only threat.

But, with three teenagers making their debuts, it was Milner who gifted Wolves the opener seven minutes before half-time.

The 33-year-old was robbed by Diogo Jota on the halfway line and the striker found Jimenez. 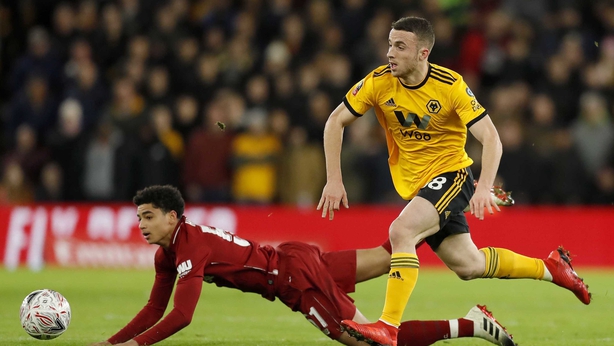 The Reds needed a response and they briefly rallied six minutes after the break.

It was out of keeping with Liverpool's passive play but Origi found a leveller after an anonymous first half when he worked space on the edge of the area and his sharp drive beat Ruddy.

Parity lasted just four minutes though as Wolves retook the lead when Neves took aim and fired into the bottom corner from 25 yards.

Wolves had lost 2-0 to Liverpool in the Premier League just before Christmas but they were much improved and only Jimenez's heavy touch as he poked around Mignolet prevented a third.

Liverpool continued to struggle, failing to find their spark, but Ruddy preserved the hosts' lead with a wonderful fingertip save with 21 minutes left - turning Shaqiri's free-kick onto the inside of the post.

Wolves held on to knock Liverpool out for the second time in three seasons.