The English FA is to investigate allegations of racism towards Tottenham Ladies defender Renee Hector by a Sheffield United player.

Hector has alleged an unnamed United player made "monkey noises" at her during Tottenham's FA Women's Championship away game on Sunday.

A statement on the FA Spokesperson Twitter account read: "The FA can confirm that we are aware of an allegation of discriminatory abuse during The FA Women's Championship match between Sheffield United Women and Tottenham Hotspur Ladies on Sunday 6 January.

"We take all allegations of discrimination very seriously and will be making enquiries into the matter."

Tottenham confirmed they had reported the incident to the FA, while United said they had launched their own enquiry into the alleged abuse.

Hector, 23, revealed on Twitter after her club's 2-1 win that she had been subjected to the racist taunts.

She said: "Such a shame that racism seems to be rising up again in football - I received some monkey noises [on Sunday] from an opposition player. The only reaction was to let the football do the talking and that we did great start to the year! @ThlfcOfficial #COYSL #SHEvTOT #KickItOut".

The incident was reported by Hector to the referee during the game, Tottenham said.

A statement on their Twitter feed read: "The club is aware of allegations of racial abuse made by Renee Hector following (Sunday's) victory at Sheffield United Women, that were reported to the referee by the player during the match.

"We have since reported the alleged incident to the FA and await their response. We shall be making no further comment on the allegations at this time."

Sheffield United added on Twitter: "Sheffield United are aware of the allegations made on social media following (Sunday's) fixture against Tottenham Hotspur Ladies. We can advise that the club is conducting a thorough investigation into this matter."

Tottenham's win lifted them to within a point of leaders Manchester United in the second tier. 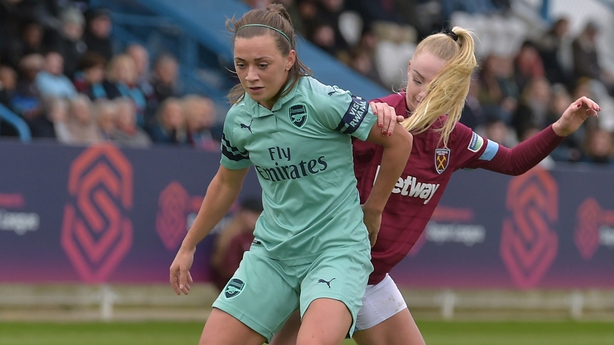 Meanwhile, Arsenal extended their lead at the top of the Women's Super League after coming from behind to win 4-2 at West Ham.

Republic of Ireland international Katie McCabe started for the Gunners, with Louise Quinn on the bench. Leanne Kiernan was an unused sub for the hosts.

Leah Williamson's header cancelled out Jane Ross' early opener for the Hammers and after Janni Arnth headed Arsenal in front, Ross struck again before the break.

Manchester City stay second but were held 1-1 at Bristol City and now trail Arsenal by two points having played a game more.

City led 1-0 at the break through Nikita Parris, but the home side hit back after the break when Lucy Graham converted a 61st-minute penalty after she had been fouled by Jen Beattie.

Chelsea kept their outside title chances alive with a 3-0 home win against second-bottom Everton, thanks to goals from Beth England, Drew Spence and Hannah Blundell.

Laura Rafferty and Ini Umotong scored in either half to earn Brighton their second league victory of the season, 2-0 at Liverpool. Marie Hourihan was between the sticks for Brighton, while defender Sophie Perry was on the bench.