Tom Lawrence's stunner shocked Southampton as Derby hit back from 2-0 down to force an FA Cup replay.

The winger struck from 25 yards just three minutes after Jack Marriott had pulled a goal back at Pride Park to earn a 2-2 draw.

The Sky Bet Championship Rams hit back, though, to show their Premier League pedigree as they chase promotion.

But Marriott blew a golden chance to win it in stoppage time when he blazed over.

The Saints, last season's semi-finalists, looked on course to reach the fourth round with minimum fuss when they opened the scoring after four minutes.

Shane Long found Redmond in space on the left and his low drive appeared to be creeping in before Keogh slid in to deflect it into the opposite corner from four yards.

With the opener Southampton relaxed and Derby boss Frank Lampard, a four-time FA Cup winner, watched on as his side had plenty of possession but little penetration.

The hosts struggled to recover from the early setback and it took until the 32nd minute for the Rams to carve out a clear opening when Craig Bryson sent Marriott scampering through.

The striker slipped in Duane Holmes but his angled effort was comfortably saved by Angus Gunn.

But Derby threatened ahead of the break when Holmes held off Ward-Prowse, swapped passes with Marriott and curled wide from the edge of the box. 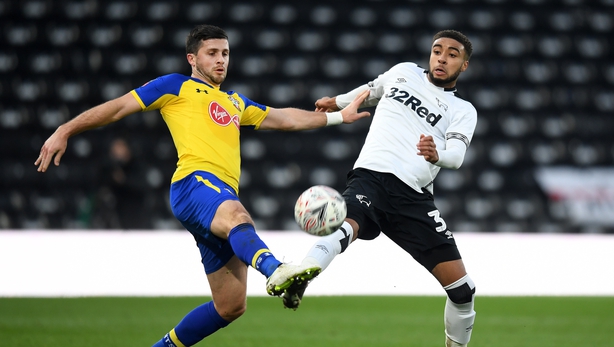 Yet, despite matching the Saints in the first half, the hosts fell 2-0 behind four minutes into the second.

If there was a doubt over the scorer of the opener, Redmond ensured there was no further debate when he cut inside and curled a brilliant effort into the top corner from 20 yards.

Having not netted before Ralph Hassenhuttl's arrival, the England international has scored four times in the manager's first seven games.

The game appeared won but Derby hit back with two goals in three minutes to level.

First, Marriott's sharp half volley from Lawrence's cross pulled a goal back after 58 minutes.

Lawrence then levelled himself when he was allowed to advance and his wonderful low 25-yard effort found the bottom corner.

A routine cup game had come to life and Mohamed Elyounoussi should have put the Saints ahead again but planted a free header straight at Roos after 67 minutes.

Ward-Prowse fired over as Southampton chased a winner and Redmond forced Roos into a smart stop in injury time.

But Marriott should have completed Derby's comeback with the last kick of the game only to balloon wildly over from 16 yards.