There was no fairytale at the Bridge for Daryl Murphy's Nottingham Forest as Alvaro Morata scored twice to ensure FA Cup holders Chelsea advanced with a 2-0 third-round win.

Cesc Fabregas, on potentially his farewell appearance, had a penalty saved after 30 minutes, before another player whose future has been debated, Callum Hudson-Odoi, twice created goals for Morata.

Morata has also been linked with a move and the Spain striker demonstrated his infuriating mix of woeful misses and clinical finishing as the Blues progressed.

Chelsea had not been eliminated in the third round since 1997-98 and reached the final in the last two seasons, winning last May in Antonio Conte's last match as head coach.

He was replaced in July by Maurizio Sarri, who was experiencing the competition for the first time.

Forest had knocked out the holders on five of the six previous occasions they had faced them, including Arsenal in last season's third round. With Nurphy ploughing a lone furrow up top, they scarcely troubled the Blues, who were defensively firm. 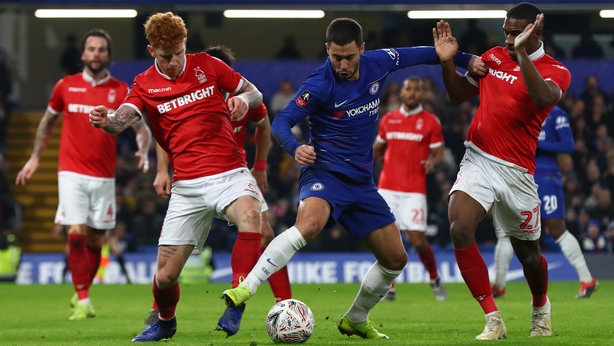 There was an eye on the future in 18-year-olds Ethan Ampadu and Hudson-Odoi, who has been linked with a move to Bayern Munich.

Fabregas, meanwhile, was named as captain amid reports of an imminent move to Monaco.

Chelsea should have scored after 13 minutes when Davide Zappacosta's cross bounced kindly for Morata. But the striker's header from five yards out went straight to goalkeeper Luke Steele.

Morata had another opportunity which went awry. Fabregas floated a pass for the striker to run on to, but Morata felt his heels were clipped by last man Claudio Yacob, 25 yards out.

The Blues striker wanted referee Andrew Madley to consult the Video Assistant Referee, but the official waved away appeals.

Both incidents did little to change Sarri's view, voiced after Wednesday's goalless draw with Southampton, that the Blues need a new front man. 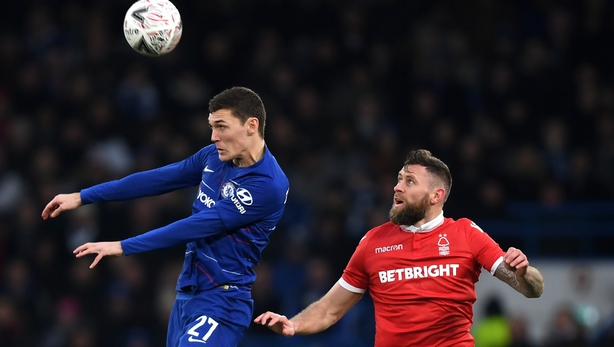 And Forest fans compared Morata unfavourably to their own striker Murphy.

Chelsea were making headway down both flanks and were presented a penalty after Zappacosta's cut-back to Ruben Loftus-Cheek. He was caught by a clumsy challenge by Danny Fox.

Fabregas' stuttering run-up was poor, players from both teams entered the area and Steele saved, diving low to his right.

There was an argument Forest should have had a free-kick for Fabregas pausing in his run-up, or for the spot-kick to be retaken due to the infringements which included Steele leaving his line. Play continued.

Steele made a number of routine saves before Eden Hazard was introduced before half-time, with Loftus-Cheek's niggling back problem having returned.

Chelsea so often look to Hazard for inspiration, but it was Hudson-Odoi who provided it on this occasion.

He beat Saidy Janko down the right and crossed to the near post, where Morata finished well for his first goal since 29 November.

Steele denied Hudson-Odoi with a sharp save and Morata somehow clipped over a Ross Barkley cross from two yards out, his blushes spared by an offside flag.

Chelsea and Morata's second came moments later, with Hudson-Odoi again the provider. He beat Janko and crossed to the back post, where Morata headed down into the corner. 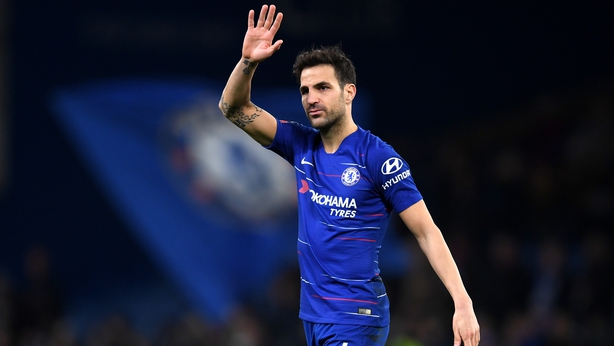 Morata's hat-trick opportunity did not come and he was replaced 15 minutes from time, heading straight down the tunnel.

The goal Fabregas wanted also did not materialise as he blazed over from 25 yards before being replaced by N'Golo Kante after 85 minutes, waving goodnight.

He returned at the final whistle to applaud the Chelsea supporters and appeared tearful as he left the field, apparently for the last time as a Chelsea player.